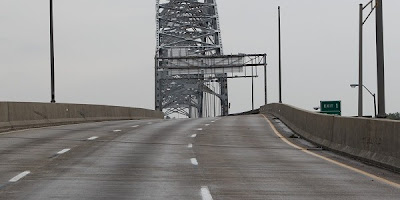 image: the Sherman Minton Bridge over the Ohio River in Louisville, Kentucky...closed indefinitely.

I haven't yet written much about the rapid deterioration of America's car-centric infrastructure, so I thought I'd remedy the situation by calling your attention to a very good article from Bloomberg this week on the subject:

Benton’s plight is playing out for small businesses across the U.S., where 3,538 bridges were closed in 2010, as customers shop elsewhere rather than take detours. With the average U.S. bridge seven years from the end of its useful life, and one-fourth of 600,000 crossings classified by regulators as “structurally deficient,” more places will be hurt by closings, said Barry LePatner, founder of LePatner & Associates LLP, a New York-based construction law and consulting firm.

Let me repeat the most important factoid from that last paragraph so that everyone recognizes the full implications of its meaning: the average U.S. bridge is a mere SEVEN YEARS from the end of its useful life. Sounds like we're facing an imminent collapse of the entire system, doesn't it?

So, you might ask, how much in the hole are we, cost-wise, as far as correcting this problem?


The average U.S. bridge is 43 years old, while the average useful life is generally about 50 years, according to the highway agency. The agency said in 2006 that it would cost $140 billion to immediately repair every deficient bridge in the U.S. That’s more than three times what the U.S. government receives in taxes annually to pay for road, mass transit and bridge projects.

Given the above, how exactly did we manage to borrow and spend $700 billion on President Hopey-Changey's utterly futile Recovery Act without correcting this problem? Wasn't all of that loot supposed to have been invested in "shovel ready" projects? You don't suppose it was because it is more profitable for corporate America to build new roadways rather than to repair old ones, do you? Gawd, you're such a cynic.

All we've managed to do is run the federal deficit up to unsustainable levels without fixing the problem. As Scott Adams once wrote in his Dilbert comic strip: "don't step in the leadership."

This is just another way that Obama has been a colossal disaster for the nation that elected him. It was bad enough to place the country far more deeply in debt trying to sustain our unsustainable car-centric economic model. It's far worse that the money was spent so incompetently.