Warning: Tough Decision Ahead on the Payroll Tax 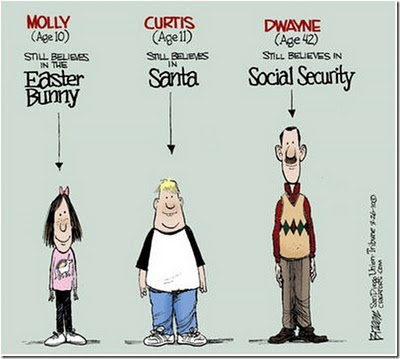 I've written here before about how the Social Security system is fundamentally insolvent and how Obama's decision to cut the payroll tax has hastened that program's ultimate day of reckoning. Well, don't look now, but the failure of the so-called "super committee" to cut the federal budget deficit has created a situation whereby the payroll tax break is about to expire. Here is CNN with the details:


With the super committee's failure, lawmakers are now facing a year-end legislative challenge that could have an outsized impact on the economy.

At issue: Whether to extend the payroll tax holiday, or let it expire.

Employees normally pay 6.2% on the first $106,800 of their wages into Social Security, but this year they've only been paying 4.2%. That tax break, however, is set to expire January 1.

Failing to extend it would amount to raising taxes during a rough economic patch -- something that President Obama would like to avoid.

Obama is expected to ramp up pressure on Congress Tuesday during a visit to New Hampshire, where he will call on lawmakers to extend the payroll tax holiday.

No, restoring the full payroll tax does NOT amount to "raising taxes." It is instead a way to sustain a program that is already running in red. It's called paying your damn bills, and it is something that this spoiled rotten country needs to get used to sooner or later.

But, as always, you can count on an economist to provide the very worst analysis available:


Economists at Capital Economics expect that consumption growth will suffer "a very sharp slowdown in the first quarter of next year if the payroll tax cut is not extended," according to a research note released Monday.

And Moody's Analytics estimated in August that letting the tax cut expire would reduce growth by as much as 0.5%, and called extending the cut one of the "most straightforward" ways to "reduce some of the coming fiscal restraint."

As I stated last summer in my post, "GDP Checkmate: Four Choices of the Apocalypse," the time for putting off hard decisions about the nation's economic future by borrowing insane amounts of money is rapidly coming to an end. Better to lose the "consumption growth" that would disappear from restoring the payroll tax now than suffer a much larger crash when America does finally start to experience the same "bond vigilantism" now being experienced by the PIIGS nations in Europe.

My guess is that the payroll tax cut will be "saved" when the Republicans agree to allow it to continue in exchange for eliminating the scheduled automatic cuts in defense war spending because of the super committee's failure. If that does happen, it will mean that this whole deficit cutting exercise was nothing but a bit of pure wankery.

Long term, of course, Social Security is doomed anyway. But keeping the payroll tax cut is like stepping down on the accelerator as we speed towards the edge of the cliff.
Posted by Bill Hicks at 7:26 AM