What's the Matter with Oklahoma? 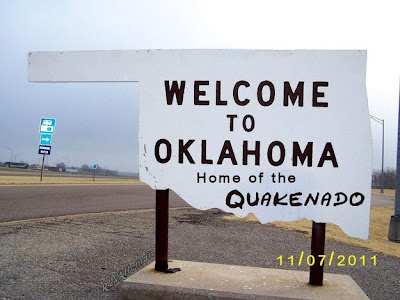 Damn near everything, as it turns out. This list of record breaking meteorological and geologic events is pretty eye-opening:


State records set this year have ranged from the lowest temperature (31 degrees below zero in Nowata in northeast Oklahoma) to snowfall in a 24-hour period (27 inches, also in Nowata) to the largest hail stone (a spiky, six-inch piece recovered in Gotebo, in southwest Oklahoma).

On Wednesday, Governor Mary Fallin declared a state of emergency for 20 counties because of earthquakes, tornadoes and severe storms.

The article could also have mentioned that this year was the hottest summer on record for the state.

The weather events, of course, are likely being exacerbated by climate change. But what about the earthquake?


The reason behind last week's earthquake in Oklahoma is still eluding scientists though they think it might have been connected to the growing use of hydraulic fracturing.

The process, commonly called 'fracking', pumps water into the earth in an effort to release natural gas and oil.

Scientists first noticed that small earthquakes in Oklahoma- with magnitudes between 1 and 2.8- near a fracking site in August, though they did nothing to stop its usage.

It sounds to me like Oklahoma has become ground zero of a perfect storm of natural events resulting from mankind's insatiable thirst for fossil fuels. But that's okay, ma. People who worry about shit like this are just a bunch of damn hippie socialists. Fire up the Suburban, we're goin' to the mall.


Bonus: They really need to change the lyrics of this song.