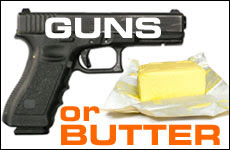 So what’s a warmongering Republican presidential candidate to do who wants to place the boot heel of the American military upon the neck of every “rogue regime” around the world where the locals actually have the audacity to be living on top of America’s oil? Ever since President George Bush the Lesser lied the country into the Iraq War, it always seemed that you could reliably count on Republican voters to mindlessly back whatever harebrained military misadventure the neoconservatives could cook up next.

But not anymore, apparently. As reported by the Miami Herald, according to a recent poll likely Republican voters in Florida appear to be waking up to the fact that America’s out-of-control military spending is hitting them in their pocketbook:


Florida Republican voters have a clear feeling about cuts to Medicare and Social Security: Don’t do it, according to a new poll by the AARP.

By wide margins, the survey shows that Republicans of all kinds — whether they’re Hispanic, moderates or in the tea party — would rather fix the nation’s budget by withdrawing from the Iraq and Afghanistan wars, eliminating foreign aid or eliminating so-called tax loopholes.

But despite these sentiments of GOP voters, many of the Republican frontrunners for president are more likely to support trimming benefits than raising tax revenues or getting out of foreign entanglements.

“There’s a major disconnect between what the candidates and other folks in Washington want and what the voters think when it comes to Social Security and Medicare,” said Jeff Johnson, AARP’s interim Florida director.

So what were the specific results of the poll?


When specifically asked if they favored Medicare cuts over withdrawing troops from Iraq and Afghanistan, only 9 percent wanted the former and 66 percent favored the latter. The numbers were similar for Social Security.

Wow—that’s pretty overwhelming. Enough so that you would think the more belligerent Republican presidential candidates are probably running scared right about now, right? Well, not so fast:


The poll also reflects an irony, of sorts, with voters: The candidates who most want to withdraw from foreign wars, Jon Huntsman and Ron Paul, were among the least likely to be favored.

Face palm! Herein lays the real problem with public opinion polls. Respondents are likely to say whatever dumb shit they think sounds good when the pollster calls them, but unless they are willing to actually change their behavior when they go to vote, nothing is going to change in the real world.

Rationally, these people may realize that the wars represent a threat to their cherished government benefits in a time of gigantic budget deficits. But many people vote based upon their emotions rather than logical thinking, and the politicians are well aware of that. It's the same dynamic that will cause millions of liberals and progressives disgusted by Obama's selling them out on nearly every issue of importance to them to traipse back to the polls and cast another ballot for him next year. Which is why you can also expect this result to have exactly zero effect on the presidential campaign and that the eventual Republican nominee, whomever he or she turns out to be, will continue to aggressively promote unfettered American Exceptionalism, regardless of the costs.


Bonus: Doug Stanhope doesn't care what your opinion is.