Freedom From Choice…is What You’re Gonna Get 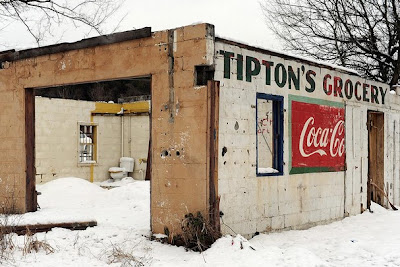 One incredibly wasteful aspect of our mindless consumer economy beloved by shoppers is the dizzying variety of choice to be had for most products. Corporations spend billions of dollars on advertising to convince the slack jawed masses that there really is any discernible difference between, say, this brand of deodorant or that. Whereas using one will result in you having to beat the hot chicks off with a stick, the other will leave you with the ripe aroma of a compost heap. It is such a stock feature of our culture that few people even consciously notice it anymore.

This phenomenon is most prominently on display at the supermarket, where we almost seem to mock the food insecurity of people in much of the third world with the endless bounty that’s on display. All of this is only made possible, of course, because of cheap oil. From mechanized agriculture and fertilizers that produce massive amounts food cheaply, to the trucks that allow it to be shipped thousands of miles quickly, to the cars that bring the shoppers, modern supermarkets are totally reliant upon inexpensive petroleum.

So logic would dictate that an early sign of our consumerist model beginning to slowly erode as oil, gasoline and diesel prices move ever higher would be a reduction in choice. Personally, I have already witnessed this with two items I used to purchase regularly that recently have disappeared from the shelves of my local grocery store.

The first was Chex Muti-Bran cereal. It had always been a bit higher priced than other Chex cereals, probably because it contains a combination of wheat, rice and corn, all of which have recently skyrocketed in price. My local supermarket initially stopped carrying the brand a couple of years ago, but a rival chain nearby still had it. Earlier this year, it returned to my local supermarket, but in a much smaller box to conceal the fact that it had risen significantly in price. This trick has been used with numerous products in recent years in a pathetic attempt to hide retail inflation from consumers.

Anyway, Multi-Bran Chex has once again disappeared from shelves at my grocery store and is now no longer available at the rival chain either. I scoured Google to find out whether it has been discontinued, but there wasn’t any information posted. Interestingly, I discovered I could still order the cereal from Amazon for nearly double the high price my supermarket used to charge. Who knew that you could shop for groceries on Amazon?

Another item that recently disappeared from the shelves is bottles of Minute Maid’s mixed berry juice, which I liked to buy despite it being relatively expensive because it contains no added sugar or high fructose corn syrup. Once again, I found that it is still available online at a higher cost than the supermarket used to charge. As with Multi-Bran Chex, I figure rising production costs must be a factor in its reduced availability, as the drink contains a combination of apple, grape, raspberry and blackberry juices.

One frequent doomsday scenario that those who are aware of peak oil like to discuss is the chaos that will break out when one day the supermarket shelves are suddenly empty. This, of course, assumes a sudden fast crash that almost instantaneously breaks the very complex supply lines that service our modern grocery stores. But what if, as seems likely, the fast crash doesn’t happen anytime soon? It stands to reason that what will probably happen instead is a slow disappearance of weaker or more-expensive-to-produce individual brands.

I can envision going grocery shopping five years from now and having a vastly reduced set of options as to which brand I want to buy for each item I select. Some things might start disappearing altogether as it becomes too expensive to ship them long distances. I love bananas, for example, but am anticipating the day when the cost of sending them from the tropics to more northerly latitudes will become prohibitive.

This is the essence of what peak oil writers mean when they claim that because of resource depletion and expensive energy, society is about to become less complex and, in the words of Jeff Rubin, “why your world is about to get a whole lot smaller.” If like me you are constantly on the lookout for real world signs of how peak oil is already affecting the economy, you should keep your eyes open at the supermarket and wherever else you shop. There you are likely to see a much better indicator of what is coming than manipulated government economic statistics or the giant Wall Street stock market casino.


Bonus: You had to know this was coming.