Maybe Sponsoring an NBA Arena is NOT a Smart Business Decision 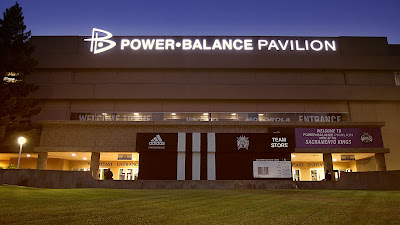 I didn't get my wish from earlier this year that the NFL season would be cancelled by the dispute between the billionaire owners and the millionaire players. But I still have hope for the NBA, which seems to be firmly determined to commit collective suicide over its selfish inability to divide up the billions of dollars it normally vacuums from the pockets of its idiotic fans every year. With that as a backdrop, I found this recent story to be of interest:


Power Balance has filed for bankruptcy protection, and officials with the Sacramento Kings -- the team that plays at the company's namesake arena -- have responded.

"We maintain close communications with Power Balance and are aware of their decision to file for voluntary protection available to them through the courts," the organization said in an electronic statement.

Guess I'm not a hip dude, because before reading this I had no idea what Power Balance was or what the company produced. Fortunately, the article enlightened me:


Power Balance is a wristband company based in Southern California.

Damn...seems like you'd have to sell an awful lot of wristbands to be able to afford the many millions it takes to get your company name plastered on a stadium. So how'd they get in financial trouble, anyway?


TMZ reports Power Balance filed last week, and just settled a $57 million lawsuit from someone claiming a product is misleading.

So how the hell can a wristband be "misleading," especially to the tune of $57 freaking million? Are those solid gold and platinum wristbands they are selling?

Anyway, the article ends on a positive note: