The Solyndra Mess Just Gets Worse and Worse 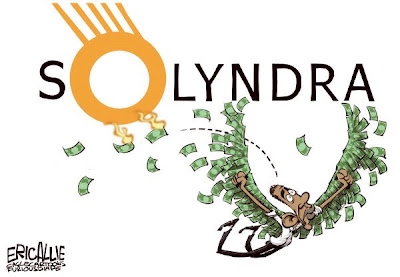 Just when you thought the whole seedy Solyndra scandal couldn't get any worse, it just did according tho this report in the Washington Post today:


Solyndra’s chief executive warned the Department of Energy on Oct. 25, 2010 that he intended to announce worker layoffs on Oct. 28. He said he was spurred by numerous calls from reporters and potential investors about rumors the firm was in financial trouble and was planning to lay off workers and close one of its two plants.

But in an Oct. 30, 2010 e-mail, advisers to Solyndra’s primary investor, Argonaut Equity, explain that the Energy Department had strongly urged the company to put off the layoff announcement until Nov. 3. The midterm elections were held Nov. 2, and led to Republicans taking control of the U.S. House of Representatives.

So the Obama administration was trying to conceal the fact that the solar panel company it gave a half-billion dollars in loan guarantees to was failing until after last year's mid-term elections. That's bad, but it gets worse:


On Nov. 3, 2010, Solyndra announced it would lay off 40 workers and 150 contractors and shut down its Fab 1 factory. The department agreed to continue giving Solyndra installments of its federal loan despite the company’s failure to meet key terms of the loan, and in February restructured its loan to give investors a chance to recover $75 million in new money they put into the company before taxpayers would be repaid.

Bad enough that the administration was playing politics with the timing of layoff the announcement, but it is even more abhorhent that it was deliberately placing the financial interests of private investors over those of the taxpayers. Combined with the story I posted this morning about a $443 million dollar contract for an unnecessary smallpox vaccine being given to a company controlled by a wealthy Obama campaign donor, and you can begin to see the pattern here. Obama is not a socialist, but a crony capitalist. And unlees you're one of his billionaire cronies, you're the one getting stuck with the bill.
Posted by Bill Hicks at 12:18 PM