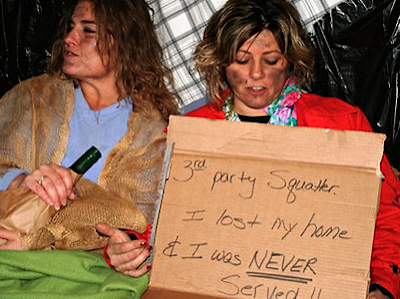 Buck up, Occupiers. It may have been a tough weekend of police abuse, but you have definitely changed the tenor of the national conversation, as evidenced by this development. Normally, I would never cheer upon hearing that people are losing their jobs, but I'm making a BIG exception for these alleged human beings:


The 89 employees of a New York law firm specializing in foreclosures who dressed as homeless people during an office Halloween party last year have been thrown out on the street.

Steven J. Baum P.C., a firm that specialized in foreclosures, is closing its doors a month after photos showing employees celebrating Halloween by dressing like the homeless surfaced in a New York Times column by Joe Nocera.

Even better is the blurb below from an e-mail Baum himself sent to Nocrea:


The firm announced the shuttering via press release and was reported by the NYT:

“Disrupting the livelihoods of so many dedicated and hardworking people is extremely painful, but the loss of so much business left us no choice but to file these notices,” said Mr. Baum in a press release issued on Monday. A firm spokesman said it would have no further comment beyond the release…

On Saturday, Joe Nocera, The Times columnist who originally wrote about the firm’s Halloween party, published another column about the controversy. In it, he quoted an e-mail that Mr. Baum had sent him last week.

“Mr. Nocera — You have destroyed everything and everyone related to Steven J. Baum PC,” said the letter. “It took 40 years to build this firm and three weeks to tear down.”

No, Mr. Baum, sorry to break it to you since you are obviously a whiny little John Galt-wannabe, but it wasn't Mr. Nocera who did you in, it was the FREE MARKET, as in people are FREE in the modern market NOT to do business with flaming fucking assholes like you. As recently as a couple of years ago you and your slimeball, bottom feeding colleagues probably could have gotten away with this little stunt with few taking notice or caring. But times are changing. People are fed up with economic predators destroying the livelihoods of working and middle class Americans and then literally laughing all the way to the bank. And how stupid were you to take PICTURES of this abomination, anyway? Clearly, it was about time that you clueless Social Darwinists got selected out of the marketplace.

I sincerely hope that you and your colleagues will soon experience what you were making fun of at that Halloween party. But hey, take heart. At least you already own appropriate outfits.
Posted by Bill Hicks at 7:19 AM