Next Up for a Bailout: the Federal Housing Administration 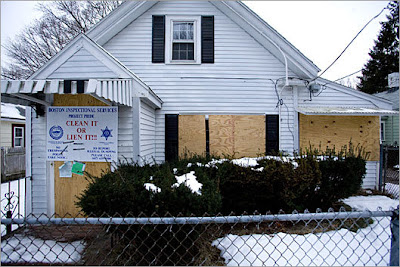 According to a report on Tuesday from the Los Angeles Times, the housing crash has been none too kind to the the federal agency that insures home mortages for moderate-income buyers:


There is a nearly 50% chance that the Federal Housing Administration will require a taxpayer bailout as the struggling housing market continues to eat away at the cash reserves of the agency, which insured about one in seven residential mortgages issued this year, according to a government audit released Tuesday.

The reserves, which are not supposed to be below 2% of projected losses, continued to fall this year, dropping to 0.24% from the already seriously low level of 0.5% last year, the report said. The drop was caused by the FHA's cash reserves falling by $2.1 billion, to just $2.6 billion.


Okay, there is a 50-50 chance that the FHA will need a bailout. What will be the deciding factor?


But under the report's baseline projection for housing prices, which assumes they will drop 5.6% in 2011 before rebounding next year to 1.3% growth, the FHA would not need a bailout, the report said. In fact, the reserve fund would return to its mandated 2% level by 2014, slightly earlier than projected last year.

"It would take very significant declines in home prices in 2012 to create a situation in which the current portfolio would require any kind of additional support," said acting FHA Commissioner Carol Galante. She said the agency's reserve fund continues to be "actuarially sound."

But the report by an independent actuary found that if home prices continue to decline next year, the FHA probably would need a bailout. The size of the bailout would depend on how much housing prices drop.


Hmmm...I think we can pretty safely say that the FHA is going to need a bailout. To think otherwise is to also think that the Jobs Fairy is suddenly going to magically appear and start handing out good-paying positions to the millions of unemployed and underemployed people out there. Maybe the FHA should give a $1.6 million consultancy contract to Newt Gingrich, since that worked out so well for Freddie Mac.

This is a developing story worth keeping an eye on since if the FHA does end up needing a bailout, the timing is likely to be in the months leading up to next year's elections. Because that's just what President Hopey-Changey needs, more federal money down the drain right at the time when he is trying to convince the voters he is serious about deficit reduction.
Posted by Bill Hicks at 6:24 PM