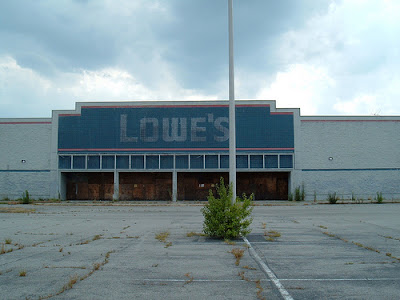 Home Depot and Lowes were riding high on the crest of the housing boom wave back during the middle of this past decade. With the housing bust, however, both are now struggling. No longer in expansion mode, Lowes this week took its first steps toward contraction and consolidation:


About 105 employees are about to lose their jobs as Lowe's prepares to close its North Kingstown store.

The home improvement store's location was open for business Sunday, and planned to permanently close at the end of the work day.

It's among 20 underperforming stores nationwide being closed by Lowe's, based in Mooresville, N.C.

The 105 workers at the North Kingstown store are among more than 1,800 full-time and part-time Lowe's employees nationwide who will lose their jobs as part of the closings.

What was interesting about this story was this bizarre tidbit included at the end:


In August, Lowe's said volatile weather and shoppers' worries about the economy hurt demand, and that the closings will allow it to focus on more profitable locations.

Ummm...volatile weather? Unless an F-5 tornado came along and flattened those stores, that doesn't seem like a legitimate reason to close them. If you don't like the weather, wait a minute, as the old saying goes.

Yes, it was the economy, stupid. Particularly the stupid housing crash.
Posted by Bill Hicks at 1:06 PM