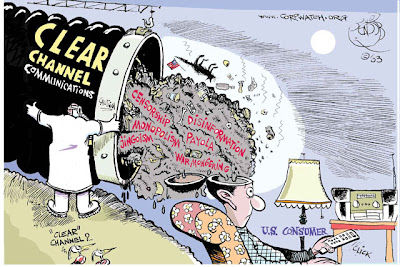 Believe it or not, there actually was a time in America when if you drove from city to city you could tune into different radio stations and hear diverse programming unique to that local community and the particular tastes of the on air talent. Nowadays, however, other than maybe a few small stations located in college towns, that programming model is long since dead and buried. It had already been declining by the 1990s when President Bill Clinton killed it off for good by signing into law the 1996 Telecommunications Act, which allowed for big media conglomerates to consolidate the vast majority of the industry.

Probably no company has pursued this strategy more aggressively than Clear Channel Communications, which currently owns around 850 stations and is the largest radio network in the U.S. Clear Channel has a very dubious reputation, in no small part because it is the home network of such talk-radio slimeballs as Glenn Beck, Rush Limbaugh, Sean Hannity, Dan Savage and Mark Levin.

That would be bad enough, but over the years Clear Channel has been accused of such transgressions as censoring opinions critical of former President Bush--including dropping the Dixie Chicks from its playlists after lead singer Natalie Maines said she was ashamed that Bush was from Texas--and using paid actors to pose as listener callers for its talk show programs.

But the most serious corrosive effect of Clear Channel's corporate practices has been the destruction of local radio, as reported by Wikipedia:


Clear Channel uses the Prophet Nex-Gen automation system throughout their properties. Like most contemporary automation systems, Nex-Gen allows a DJ from anywhere in the country to sound as if he or she is broadcasting from anywhere else in the country, on any other station. A technological outgrowth of earlier, tape-based automation systems dating back to the 1960s, this method — known as voice-tracking — allows for smaller market stations to be partially or completely staffed by "cyber-jocks" who may never have visited the town from which they are broadcasting. This practice may also result in local on-air positions being reduced or eliminated. It has been stated that Clear Channel maintains a majority of its staff in hourly-paid, part-time positions.

So what’s the big deal? I hear you asking. I've got my satelite radio hookup, so I'm good to go.

Well...nothing, unless there is, you know, a local emergency or something:


Clear Channel was criticized for a situation that occurred in Minot, North Dakota on the morning of January 18, 2002. At around 2:30 a.m., a Canadian Pacific Railway train derailed and leaked 240,000 US gallons of toxic anhydrous ammonia, releasing a cloud of caustic, poisonous gas over the city. At the time, Clear Channel owned six commercial radio stations out of nine in the Minot area. City officials attempted to contact the local Clear Channel office by telephone to spread warnings of the danger using its radio stations, but it was several critical hours before the station manager was finally reached at his home. In the meantime, 9-1-1 operators were advising panicked callers to tune to KCJB-AM for emergency instructions, but the station was not broadcasting any such information.

So, much as I hate to see anyone lose their jobs, I did feel a little bit of Schadenfreude upon reading in this recent story in Billboard Magazine that Clear Channel is having financial difficulties:


A new wave of personnel reductions has hit Clear Channel radio stations in small and medium sized markets. As of Wednesday afternoon (October 26) it was unclear just how many people are being cut as part of the reduction, but indications are the numbers could be in the hundreds.

And yet, despite firing people at its smaller stations, they also had the gall to make this announcement:


The company also says that, despite reducing the number of personnel at each station, the new programming will serve local listeners and advertisers and will result in, "more localization, not less."

A large part of the commitment to localization will fall to the recently announced group of 45 Regional Market Managers and Regional Programming Managers who are being asked to "focus more on their local brands and engage more with their audiences and local communities."

They will get assistance from some of the company's top on-air talent who will be asked to, "conduct custom breaks and produce localized content for each city."

Because nothing says “localization” more than having Rush Limbaugh personally read an on air commercial for Joe’s Auto & Tire Repair, or have some traveling regional sales manger drop in once a month to meet with the local advertisers. Paging Herb Tarlek...your moment in the sun has arrived.


It is much easier for a brand trying to reach a specific national audience to buy commercials in network television shows that air in nearly every city in America than it is to buy spots on radio stations across the country that all deliver the same audience. That's because not only will many of the radio stations be owned by different companies, but each one will have its own local programming style, making it difficult to deliver a consistent audience. With Clear Channel's new strategy of using a centralized, national system for radio programming that could change: Advertisers will conceivably be able to buy programming that is consistent across multiple markets reaching the target audience they want.

Of course, if Clear Channel's new strategy proves successful and brings new advertising dollars to radio from other mediums, it could become the standard operating model for the industry. Other radio companies could begin placing an emphasis on national and regional programming of their own and the sound of radio could change quite radically. And radio's traditional position as the strongest local medium could change into one with a more nationalized perspective.

That sure sounds like they are “going local” to me. And just to drive the point home:


No one can predict exactly what this would mean long-term for the medium. Certainly Clear Channel’s initial cuts had a large human cost with one source estimating an average of five people were cut per cluster across 100 markets. If other radio companies follow suit it will more than likely lead to widespread workforce reductions leaving a lot of radio's creative people on the outside looking in.

Because that is just what the wasteland that is modern day radio in America needs: more “creative people” heading to the unemployment line. But hey, at least they will have plenty of time to sit around listening to Rush Limbaugh.


Bonus: Oh, Andy Travis, where are you when we need you?