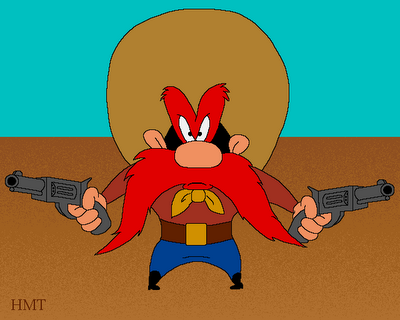 When the going gets tough, the tough...rustle cattle apparently. You read that right, the ongoing slow crash of the economy has led to a resurgence in cattle rustling. Here is Reuters with the details:


Cattle rustlers, casting aside saddle and spurs for modern horsepower, are roaming the West with four-wheel drive and GPS technology in a resurgence of livestock thievery considered a hanging offense on the old frontier.

State livestock officials said the increase in cattle crimes was linked to the slumping economy, soaring beef prices and the advent of handheld global positioning systems that allow rustlers to more easily navigate the wide-open range.

They said contemporary thieves may find it more convenient and lucrative to pick off a couple cows, worth as much as $2,000 a head, than to rob a convenience store.

Hayhurst said the incidence of cattle gone missing under suspicious circumstances in Idaho during the past three months had already surpassed the 250 such reports he received for all of last year. That coincides with spikes in cattle thefts in Colorado, Montana, Nevada, Wyoming and elsewhere.

It strikes me that rustling cattle, even using modern technology and transportation, would be an awful lot of work. Which is yet another indicator that plenty of people who would otherwise be content to remain gainfully employed and not ever resort to criminal activity are becoming increasingly desperate as the Great Recession rolls on.
Posted by Bill Hicks at 7:21 PM