New Poll: 41% Think the American Dream is Dead, the Other 59% Believe in Unicorns 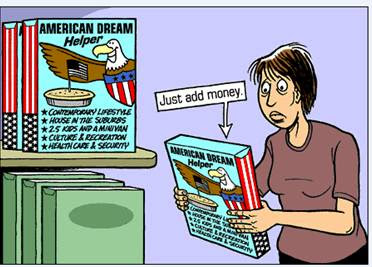 A recent poll conducted by Yahoo Finance shows that Americans are slowly waking up to the basic truths that I write about every day here at TDS:


A new survey by Yahoo! Finance shows Americans have a disturbing lack of hope and a frightening lack of retirement planning.

Among the highlights of the poll:

-- 37% of adults have NO retirement savings and 38% plan to live off Social Security.

-- 63% of Americans believe the economy is getting worse, including 72% of those over the age of 55.

These findings are consistent with broader trends The Daily Ticker has reported on in the past year: Despite macro data showing the economy has technically recovered from the 'Great Recession', the majority of Americans just aren't feeling it. Considering 49 million Americans are living in poverty, the "real" unemployment rate is 16% and millions of Americans are facing foreclosure, it's no wonder many believe the recession never ended.

Bad as that first number is, the second one is even more scary given how, as I have demonstrated here at TDS, Social Security is effectively bankrupt just as the Baby Boomers are beginning to retire in large numbers.

The poll goes on to show the flip side of these numbers:

-- 45% of parents believe their kids will be better off than they are.

-- 68% of Americans say their currency financial situation is either "excellent" or "satisfactory."

Here too, the survey is consistent with trends we've reported on: In an era of rising income inequality, those doing well in America today are doing quite well, indeed.

Yep--most of those who still have their jobs remain completely in the dark about what so many of their fellow citizens are experiencing. They are the ones who stare uncomprehendingly at the Occupy protests and wonder what all of the fuss is about. Many will no doubt be lining up at midnight next Thursday so they can trample some of their fellow citizens trying to be the first to save 20% on the new flat screen teevee.