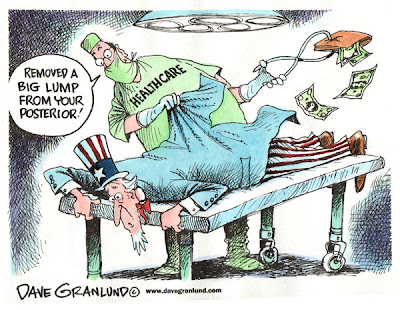 This story from Crain's New York Business is like the perfect storm of issues I've been writing about for months here at TDS:

NuHealth cut 175 employees, mostly from the Civil Service Employees Association, and the tally included 15 doctors—on top of another 77 workers who took an incentive for early retirement in late October. The cuts will save about $20 million at NuHealth, which had been profitable in 2009 and 2010.

“A $25 million increase in pension costs is not sustainable, at current staffing levels, for a public benefit corporation with a $553 million annual budget,” Arthur Gianelli, NuHealth's president and chief executive, said in a statement.

With the corporation's new 2012 pension bill, contribution costs will have risen by $25 million, to $42 million. It now pays an average of 18.9% of payroll to the New York State Employee Retirement Fund, an amount it said far exceeded the contribution levels of its competitors. “The cost of a public-sector workforce is simply too great to sustain at current staffing levels of 3,800 employees,” Mr. Gianelli said.

The takeway lesson here should be pretty simple: even though the economy has at least temporarily stabilized thanks to the massive amounts of federal deficit spending, good paying jobs are still being destroyed because of fast-rising health and pension costs. In this environment, how many such jobs are likely being created out there or are going to be created anytime soon?

As long as the federal government can continue to borrow a trillion and a half dollars (or more) every year, it will continue to prop up the creaking facacde of the real economy (note too, that cuts in Medicaid payments were another factor in these layoffs). But all it can do is delay the eventual day of reckoning rather than prevent it.
Posted by Bill Hicks at 8:04 PM