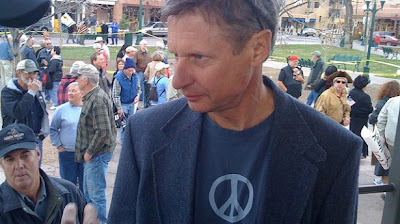 Former New Mexico Governor and Republican presidential candidate Gary Johnson, who like former Louisiana Governor and fellow candidate Buddy Roemer, has had to cool his heels in frustration while the Republicans have invited the likes of crazy ass Herman Cain, Michelle Bachmann and Rick Santorum into their debates, has finally after many months realized that the party doesn't much care for guys who go around wearing peace symbol tee-shirts out in public. Here is Talking Points Memo with the details:


Disgruntled former New Mexico governor Gary Johnson says he is considering leaving the Republican slate and running as a third-party candidate in the 2012 presidential election.

“I feel abandoned by the Republican Party,” Johnson, who has been left out of most of the Republican debates, told the Sante Fe New Mexican newspaper this week, saying he might seek the Libertarian Party’s support.

“The Republican Party has left me by the wayside,” said Johnson, whose polling numbers have recently been so low that they are often not even being picked up by pollsters.

“If I’d have been included in 16 of the last debates we wouldn’t even be having this conversation,” he said.

Pardon me, Gary, but what the fuck took you so long? After all, you should have known that you weren't going to get very far with this:


Johnson, 58, holds dear libertarian values such as low taxes and limited government and wants to legalize marijuana. He is also a fitness fanatic, having competed in a number of “Ironman” triathlons and climbed Mount Everest.

And yet you are trying to win the nomination of a party that believes low taxes are only for the rich; supports every effort to INCREASE government in the areas of defense war, torture and domestic spying; fully supports the war on drugs and is so anti-health and physical fitness that it just declared pizza a vegetable suitable for school lunches. You and Buddy Roemer should have woken up to the fact that the Republican Party left you behind a LONG time ago in its quest to become America's first fully fledged bastion of fascism. In fact, Ron Paul should also acknowledge the fact and leave the party once and for all. Because all you libertarian types are doing by remaining within that lunatic asylum is helping to enable pretty much everything you claim to stand against.
Posted by Bill Hicks at 12:34 PM