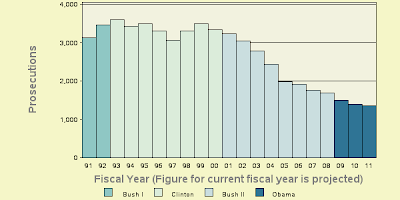 In the latest example of the Same-Old-Shit We Shouldn't Believe In, it was reported on Tuesday that prosecutions of financial institution fraud under the Obama administration are far LOWER than they were under President George Bush the Lesser (though in fairness, as you can see in the chart above, the annual total dropped throughout Bush's presidency and would have no doubt continued to do so had he stayed in office).


Federal prosecutions for financial institution fraud have continued their downward slide despite the financial troubles reported in this sector. The latest available data from the Justice Department show that during the first eleven months of FY 2011 the government reported 1,251 new prosecutions were filed. If this activity continues at the same pace, the annual total of prosecutions will be 1,365 for this fiscal year, down 28.6 percent from their numbers of just five years ago and less than half the level prevalent a decade ago. See Table 1.

The comparisons of the number of defendants charged with financial institution fraud offenses are based on case-by-case information obtained by the Transactional Records Access Clearinghouse (TRAC) under the Freedom of Information Act from the Executive Office for United States Attorneys.

What more evidence do you need that Obama has merely been running Bush's third term? After the financial crash of 2008, the federal government should have put at LEAST as much effort in combating financial fraud as it does on terrorism. The numbers on that chart should have quickly doubled or more from Bush's last year in office, and yet exactly the opposite has occurred.
Posted by Bill Hicks at 12:07 PM