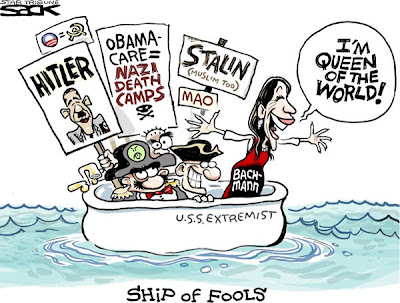 A couple of weeks ago in the wake of the Herman Cain sexual harassment scandal, I called out Cain for not being a serious presidential candidate and merely running for the publicity and financial benefit. Well, now comes confirmation that Michelle Bachmann has essentially been doing the exact same thing:


If you had any doubt that Michele Bachmann's presidential campaign is little more than a vanity effort designed to snag camera time and sell copies of her hastily written memoir, add this to the evidence locker: According to internal campaign documents, her own treasurer says she has no plans to field employees or volunteers in Florida, Texas, Michigan, or California, and the campaign hopes at best to raise just $30 million—a lot less than it generally takes to win a national primary.

That's according to the Bachmann campaign's application for a liability insurance policy, which a source forwarded to us. (We agreed to only publish portions of it.) The application, which appears to have been filled out by hand last June by Bachmann's campaign treasurer Nancy Watkins, lays out Bachmann for America's fundraising and staffing plans through roughly June 2012, or just two months before the Republican National Convention where Bachmann wants us to think she expects to accept the GOP nomination. Let's just say she's thinking small.


The application also lists the campaign's projected revenues at $30 million through June 2012. Again, not nothing. But consider that in 2008, Mitt Romney raised $65 million—and spent $110 million, owing to his personal wealth—to lose the nomination, and it seems like something of a lowball number. When John McCain sat down to forecast his path to the nomination in early 2007, he predicted a haul of $71 million in that year alone.

In other words, people who think they can actually win don't think you can do it for $30 million. You can, however, become a household name and build a cult-like following of religious fanatics who will buy things from you. Like books.

Of course, the application is just some paperwork that a campaign functionary filled out several months ago, and it may not have accurately reflected the thinking of the campaign or Bachmann. For that, it's much better to look at what Bachmann is up to now. Like this Friday—Black Friday—when she'll be at the Mall of America signing books.

Because that's what our presidential campaigns have descended to these days: just another fucking reality teevee show. The Republican party ought to be ashamed of itself for letting the likes of Bachmann and Cain into their debates, especially while keeping out Buddy Roemer and Gary Johnson, both former governors and candidates who actually have some real ideas of how to fix what ails the country.

For all you have done, Michelle Bachmann, to coarsen American political discourse and serve as a massive distraction to the very serious problems ailing the country just so you can feed your insatiable thirst for fame and fortune, I hereby declare you to be a Real Attention Whore of Genius.


Bonus: World Party nailed it more than 20 years ago.