14 Car and Truck Models to be Discontinued Next Year 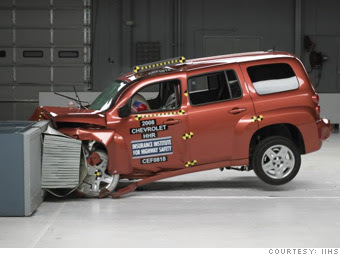 Though car sales in the U.S. have stabilized after their dramatic fall during the early stages of the Great Recession, it is obvious that automakers are still feeling the effects. What’s more, it is liable to get worse as the effects of the end of the cheap-oil era continue to grow. One indicator of this is how many car models have been disappearing in recent years. In some instances, whole lines like Pontiac have fallen by the wayside.

So here comes a story from Yahoo News spelling out the latest models which will no longer be produced. The only model I have recent experience driving as my office has a couple for business use is this one:


Chevrolet HHR - Once upon a time Chrysler took a boring small car (the Neon), grafted a body that recalled 1930s-era roadsters on top of it and created the PT Cruiser. Seeing Chrysler's initial success, GM copied Chrysler's play step by step — hiring the PT Cruiser's designer to draw a body meant to evoke the 1930s-era Suburbans and using the chassis of the compact Cobalt sedan. Imitation may be flattery at its most sincere, but GM didn't copy Chrysler's sales; the HHR was big and cheap but thirsty, and like the PT never received enough updates to stay current — although the supercharged SS version ranks as one of the best modern sleepers available.

Personally, the HHR is a hideous vehicle that never should have passed through the design stage. The windshield is tiny and the weird configuration of the front seat and my somewhat above-average height meant that the driver’s side sun visor is at eye-level. Trust me, I won’t miss them. For that matter I also don't miss PT Cruisers, which were discontinued a couple of years ago.

Volvo S40 & S50 (my wife had a Volvo. Very dependable, except that every accessory was prone to breaking at a HUGE cost to repair)