The Proposed "Pay-Per-Mile" Tax is a Shockingly Dumb Idea 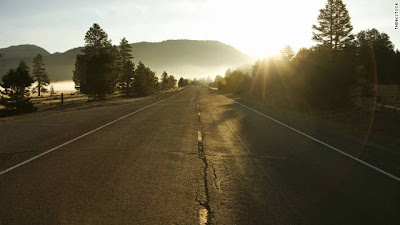 I've written on this blog before that one of the biggest problems with our complex modern industrial society is that a substantial portion of the population is fundamentally incompetent, even in areas in which they are supposedly expert. Case in point is a recent suggestion put forth by so-called transportation "experts" as to how to solve the severe underfunding of the nation's federal highway fund, as reported the other day by CNN:

But the fuel tax is running out of steam, experts warn, because more efficient vehicles are using less fuel and rising fuel prices discourage driving. As tax revenue falls, so does the nation's ability to pay for road construction and maintenance.

The solution, say many transportation experts, is to replace -- or supplement -- fuel taxes with a per-mile tax on every vehicle in America.

Okay, so how exactly would such a harebrained scheme work, anyway?

That's the number of cars, trucks and motorcycles that a tax per mile system would have to monitor.

Some proposals call for using GPS satellites to gather mileage data on each vehicle.

When it comes to tracking their vehicles, Americans tend to be really touchy about protecting their privacy.

According to a University of Iowa poll, only about 20% of drivers would choose a pay-per-mile tax system if GPS tracking is involved.

The anonymous driver will soon be an extinct species, says Neil.

"You can't drop off the grid. Ten years from now, it will be virtually impossible to drive a car that doesn't have an electronic signature," said Neil.

"It doesn't matter whether you have OnStar or you rent a car -- it's going to have a 'black box.' If you've got any kind of navigation, The Man -- with a capital M -- knows where you are."

University of Iowa research shows that the public would be more willing to accept per-mile taxes if its monitoring technology doesn't record a vehicle's specific location.

Taking your vehicle to have someone read the odometer every year -- like some states do with emissions testing -- might be an option.

But some experts fear that method might be too expensive. Also, the resulting once-a-year tax bill might be too much for some drivers to pay.

During fuel stops at gas stations, a device that already exists in most cars would text the car's mileage information to a "back office" data base.

The office would then adjust the price of fuel at the pump based on each vehicle's mileage driven.

Implementing any system would be tricky, says Paul Hanley, who headed the Iowa study. Retrofitting existing cars with the required technology would be almost impossible, he says.

The cheapest and least difficult option says Hanely, would be to install devices in new cars and slowly transition to the new system as the nation's entire fleet of vehicles turns over.

It takes about eight years before 90% of our vehicles are turned over, Hanley says, and more than 10 years to convert the fleet to nearly 100%.

"It's inevitable," says Hanley, who's been conducting a real-world test of a pay-per-mile system with more than 2,500 drivers in 12 locations from coast-to-coast. Per-mile taxes "with a combination of tolls is coming as we move away from the fuel tax."

Sorry about the length of that excerpt, but I felt I had to include it all to demonstrate just how breathtakingly stupid this whole idea is. From privacy concerns, to the cost of administering the program, to the logistics of getting a monitoring device on every car, to the unaffordability of a lump sum annual tax payment--the whole concept is so riddled with real world practical flaws that it should have been rejected outright before it ever received coverage in the mainstream media.

Then you have the most obvious drawback of all in that this scheme PENALIZES people who buy fuel-efficient vehicles. After all, what fucking sense does it make from an energy conservation standpoint that a Hummer, which barely gets double-digit miles to the gallon, should be taxed at the same rate as a hybrid that gets 50 MPG, especially when the smaller, lighter hybrid is likely to cause less wear and tear to the roadways that then need to be repaired?

One question that the CNN stenographer reporter should have immediately asked Mr. Hanley is, why exactly are we "moving away" from the fuel tax when raising it seems to be a far more simple solution? Actually, the reporter does at least mention the possibility a bit farther down in the article:


The best and least complicated solution is to raise the fuel tax, which hasn't changed since 1993. But that idea comes with its own set of political challenges. Many members of Congress would likely oppose any kind of tax hike.

Oh, so we're supposed to unquestioningly swallow the idea that Congress would oppose any sort of increase in the fuel tax, but would merrily go along with a complex and damn near unworkable scheme such as this? Okay, I'll play along. Maybe they WOULD in fact agree to implement this idea. If so, why do you suppose that would be? You don't think it might be because wealthier Americans, including the one-percenters who are the biggest campaign contributors, are the ones most likely to be driving those Hummers and other gas guzzlers, do you? Or that big business would get the contracts to manufacture and install the monitoring devices? Man, and I thought I was cynical.

The only good news here is that it is extremely unlikely that America's car-centric, business-as-usual economic model is going to hold together long enough for this nefarious scheme to be implemented. I merely highlighted it to serve as yet another example of how the elites and their totally compromised so-called "experts" are deviously and tirelessly thinking of new ways to fuck over the rest of us, even if the idea in question clearly shows just how incompetent they are.
Posted by Bill Hicks at 6:57 AM