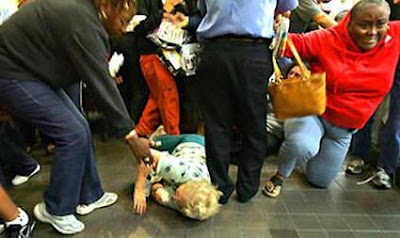 Seems like some of the retail workers expected to come in on Thanksgiving night to allow their employers to get an earlier-than-ever jump start on this year's "Black Friday" are none too pleased about the prospect:


As more retailers try to turn Thanksgiving Thursday into Black Friday — some employees are fighting back.

More than 7,000 people signed an online petition on change.org asking retail giant Target to reverse its decision to open its doors on Thanksgiving Day — and allow workers to spend the holiday with family and friends.

There are hundreds of comments on the petition supporting retail workers’ rights to Thanksgiving Day off, including this one from Caroline Hemenway: “This is absurd! Corporations are treating their workforce like serfs and fomenting a toxic consumer culture. Pure, unadulterated greed.”


Ummm...yes they are, Ms. Hemenway...cause that's the AMERICAN way, don't you know. What are you, some kinda socialist?

Here is what the organizer of this effort had to say:


The campaign was launched by Anthony Hardwick, a Target employee from Omaha, Nebraska, following news that the company’s management had moved the standard Black Friday opening time from 5 a.m. on Friday to midnight on Thanksgiving. The new opening time will require employees to arrive at work by 11 p.m. on Thanksgiving Day.

“All Americans should be able to break bread with loved ones on Thanksgiving,” said Hardwick, who works as a part-time parking attendant at a Target store in Omaha. “With the midnight opening, employees like myself will have to leave for work right in the middle of Thanksgiving dinner. We don’t mind hard work, but cutting into our holidays is a step too far.”

“If Target doesn’t reverse its decision and allow associates to spend Thanksgiving holidays with their family, they might suffer from a fast-growing consumer backlash,” Hardwick added.

Will they? After Target, Macy’s, Best Buy and Kohl’s announced plan to open at midnight on Thanksgiving – the biggest fish of them all — Walmart — decided to go even further and open at 10 p.m. on Thanksgiving.


Sadly, I agree with the author of this article in questioning whether there will be any backlash whatsoever against the box stores, or whether it is more likely instead that millions of slackjawed, drooling consumer zombies will be trampling each other at the stroke of midnight all across this once-great land trying to get $20 off on that loss-leader video game. Any employees who fail to show up for work as instructed will no doubt be shitcanned. After all, with the real unemployment rate well into the double digits, they can easily be replaced.

I found this article to be profoundly depressing. "Black Friday" has gone from being a quaint tradition that even my own family enjoyed when I was growing up to being a shameful annual display of the worst aspects of our mindless consumer culture. Look at the crazed idiots in that picture above from one of the notorious trampling incidents that seems to be an annual feature of this sick ritual. You just want to shout at these people: what in the FUCK is WRONG with you? Are your lives REALLY so fucking empty that you think the only thing that can possibly fill the void is the latest hot toy cheaply made in China?

You want to know why our democracy is failing? Because the same millions of people who cannot see how fucking absurd it is to spend the wee hours of Thanksgiving night elbowing each other and standing in long lines at godforasken, ugly ass box stores are the same fucking bozos who complacently go to vote for the parade of shit that is on the ballots on election day. They don't pause to reflect any more about just how awful their choices are at the polling place than they do about how Madison Avenue's soulless marketing cretins manipulated them into those stores in the first place. To be successful, any representative form of government needs informed citizens capable of critical thinking. Here's your proof as to how little of that we have these days.

So I while I certainly wish the retail employees who are signing this petition the best of luck, they have to know that if they seriously challenge the consumerist steamroller they are going to get flattened. And if the economy continues to get worse, no doubt next year the big box stores will be open at 8:00 on Thanksgiving, or 6:00. Or hell, why not just open them at noon? That way you can take your Thanksgiving dinner with you in a picnic basket to eat while you are waiting in line. That's a win-win if I've ever heard one.

The otherwise pedestrian filmmaker George Romero hit upon one genius idea back in 1978 when he set his second zombie movie, Dawn of the Dead, in a shopping mall. But even Romero must these days be amazed at just how apt his snarky metaphor has become. I get sick and tired of hearing clueless conventional liberal and progressive commentators who are always coming up with unworkable political ideas as to how we can "save" our economy. What are we saving, exactly? This? I say let it all fucking burn.


Bonus: The Dead are already walking the Earth.