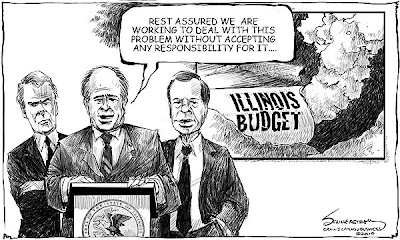 The headline to this article from Bloomberg claims that the State of Illinois is "treading water," when a more apt metaphor would be that the Land of Lincoln is actually drowning in a sea of red ink:

While revenue grew from higher personal and corporate taxes, “Illinois’ financial position has not improved,” Topinka said in a report today. The combination of unpaid bills to vendors and Medicaid obligations, estimated at $8.5 billion in January, means payment delays will persist, according to the report.

Illinois is second only to California as the state with the lowest credit grade from Standard & Poor’s. S&P may cut the general-obligation rating from A+, fifth highest, “if there is no progress on structural budget solutions and if Illinois does not address the significant pension liabilities and associated cost pressure,” the company said last week.

While tax increases boosted revenue by about $7 billion, or 3.9 percent in the first three quarters of the fiscal year that began in June, the gains were undercut by the loss of federal funding and financing of pension contributions directly, rather than through bonds as in the past two years, Baar Topinka said.

Democratic Governor Pat Quinn has proposed a voluntary 3 percent increase in pension contributions from current employees and a cut in cost-of-living increases for retirees.

“Bold action” is required to save the retirement systems, the governor told reporters in Chicago April 20. In fiscal 2010, Illinois had the lowest-funded state pension in the U.S., with assets equal to 45.4 percent of projected obligations, according to data compiled by Bloomberg.


Bonus: Since Styx is from Chicago, this song seems particularly appropriate