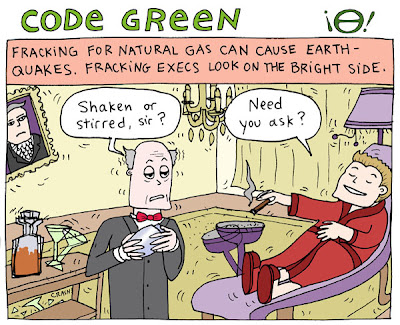 Here is a story that really warmed my heart, if for no reason than because I am a cynical, cold-hearted SOB. CNN Money has the details:


Can Chesapeake Energy's chief executive pull yet another rabbit out of his hat?

To plug what's been estimated as a $9.2 billion gap between Chesapeake Energy's 2012 capital expenditures and its cash flow, CEO Aubrey McClendon needs to sell assets fast.

McClendon has said that Chesapeake plans to sell up to $17 billion in assets by the end of 2013 to fill that gap, but analysts and M&A advisors question whether Chesapeake's assets are worth as much as McClendon claims.

While Chesapeake has valuable assets, it's unlikely to be a takeover target because it also has a heavy debt burden of roughly $10 billion, say analysts.

McClendon and Chesapeake came under fire this week after Reuters reported that McClendon took roughly $1.1 billion in personal loans against his stake in Chesapeake wells.

Low natural gas prices, however, are not the company's only problem:


Yet Argus' Weiss noted that there's only so much that Chesapeake can cut because they could lose leases on production sites if they don't make investments in them. "Since 2001, their capital expenditures have always exceeded their cash flows," said Weiss.

McClendon has built a track record on buying oil and gas wells and selling them for a profit. The company recently sold assets for $2.6 billion to three groups of buyers.

"That's what they're good at, buying stuff and selling it at a higher price," said Subash Chandra, an oil and gas analyst at Jefferies Group.

Hmmm...you know what that business model sounds like? The mortgage, real estate and home construction industries during the housing bubble years. Buying stuff at a lower price and selling it at a higher price is a great business model...until you run out of greater suckers. THEN, you're fucked.

It also doesn't do anything whatsovever to improve the overall economy. Being an expert "flipper" of any asset may make a person rich provided they know enough to bail out before the fall, but all they really are is a scavenger getting fat on the excess of wealth that is sloshing around during times of prosperity.

The real problem for the fracking industry, aside from the numerous environmental concerns about the practice, is that production grew so fast that it caused the bottom to fall out on natural gas prices. Now you know why there was so much pressure on the Federal Energy Regulatory Commission to approve a natural gas liquefaction and export terminal in Texas as I posted about here last week.

In the end, the entire fracking industry appears to be in trouble:


Overall, investors remain a bit befuddled by how Chesapeake accounts for interest expenses and where profits come from.

"They're spending a lot of money and the money they're making seems to be coming from raising more money," said Daniel Yu, a private investor who has been studying the company but does own any shares or short positions on Chesapeake.

Like many of its competitors, Chesapeake must wrestle with a new world of $2 and under natural gas prices. "If gas stays at $2, there's not a single company out there that's prepared for it," said Chandra.

So we allowed the fracking industry to go crazy with little regulation despite having no idea what the real risks of the process are just so it could oversupply the market at put its own future in jeopardy. What a brilliant fucking culture we are.


Bonus: Sounds like the fracking industry lost on Jeopardy