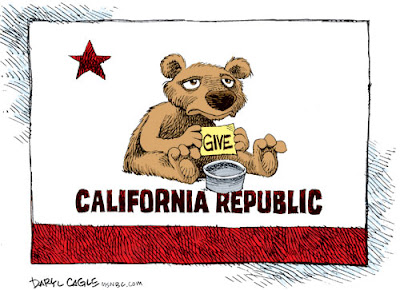 In the postwar era, California has been known and trend setter for the entire nation. As such, the rest of the country really needs to sit up and take notice of this story that appeared yesterday in the New York Times:


The state budget shortfall in California has increased dramatically in the last six months, forcing state officials to assemble a series of new spending cuts that are likely to mean further reductions to schools, health care and other social programs already battered by nearly five years of budget retrenchment, state officials announced on Saturday.

Gov. Jerry Brown, disclosing the development in a video posted on YouTube, said that California’s shortfall was now projected to be $16 billion, up from $9.2 billion in January. Mr. Brown said that he would propose a revised budget on Monday to deal with it.

“We are now facing a $16 billion hole, not the $9 billion we thought in January,” Mr. Brown said. “This means we will have to go much further and make cuts far greater than I asked for at the beginning of the year.”

Mr. Brown disclosed the news in a video that had all the trappings of a campaign announcement. In it, he aggressively accounted for the steps he said he had taken to try to scale back a $26 billion deficit he found upon taking office. And he urged viewers to back an initiative he is putting on the November ballot that would increase sales taxes by 0.25 percent and impose an income tax surcharge on wealthy Californians to try to stave off more cuts.

State officials said Mr. Brown’s proposal would include a package of immediate cuts, as well as others that would be triggered only if voters failed to approve his tax plan. The sales tax increase would expire after four years, while the income tax surcharge would last for seven years.

State officials said the shortfall was a result of disappointing revenue collections in April as California continued to struggle to pull out of the recession. “We are still recovering from the worst recession since the 1930s,” Mr. Brown said.

Still, the state controller reported that the state had exceeded spending by $2.1 billion as well, though Mr. Brown said court rulings and other actions that restricted California from making the cuts were at least partly to blame.

At the same time, the deficit projections — which have been increasing since Mr. Brown and the Democratic-controlled Legislature approved a budget last summer — suggest that the state may have been overly optimistic in estimating what kind of revenue it would take in. That has been a repeated problem in Sacramento as officials have struggled over the past five years with the state’s worst financial crisis since the Depression. Mr. Brown, in taking office last year, pledged to end what he said were the tricks lawmakers regularly used to paper over budget shortfalls.

And all of this at a time when the economy is supposedly "recovering." So why does the state continue to overestimate projected revenues, even after electing a governor who has pledged to get serious about not doing so? My guess would be that a big part of the reason is that those formerly unemployed workers who have been lucky enough to find jobs have done so at salaries well below what they used to earn, meaning that they aren't contributing nearly as much in taxes to the state coffers.


Bonus: From my You Tube channel...the California state budget is slightly less than even