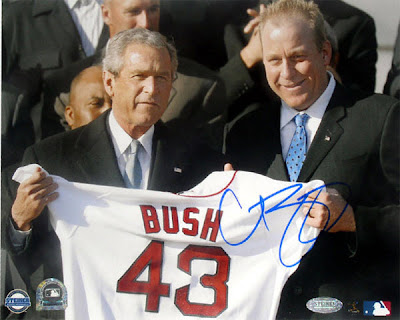 If you're a baseball fan, you'll remember Curt Schilling as a talented pitcher who retired a few years ago after helping the Boston Red Sox win their first World Series in nearly 90 years. Schilling also has always worn his conservative politics on his sleeve, which is how he ended up next to Chimpy Bush in the picture above. Like many other "free market" conservatives, as it turns out Schilling not only has no scruples about suckling at the public teet, but also has the stones to beg for a bailout when things go south. Here is Talking Points Memo with the story:


Curt Schilling is a hero to New England baseball fans, known for his performances in high pressure situations. But as a businessman, he’s in big trouble, and not the kind he can pitch his way out of.

The former MLB all-star’s start-up video game company, 38 Studios, missed a $1.1 million payment to the state of Rhode Island on May 1, and things have only gotten more complicated since.

Rhode Island lured 38 Studios away from Massachusetts in 2010, in exchange for $75 million in guaranteed loans. At the time, then-Governor Donald Carcieri, a Republican, considered the company a chance to jump-start a new business sector in the state. The company promised to create 450 jobs in three years. Massachusetts officials declined to match Rhode Island’s offer. Earlier this year, the company’s first game, “Kingdoms of Amalur: Reckoning,” came out to positive reviews. “It sings with infectious, engaging excellence,” raved The New York Times.

But the company missed a payment earlier this month, and Schilling was forced to ask for more public assistance this week, The Boston Globe reports. The company said it did not have enough money to make payroll for its nearly 300 employees. The Rhode Island official who oversaw the loan guarantee resigned on Wednesday. And the troubles reached an absurd high point on Thursday, when the company hand-delivered a check to the state for $1.1 million before warning that it didn’t have the funds to cover it.

“38 Studios arrived at [Rhode Island’s Economic Development Corporation] at 5 p.m. with a check. Upon learning from the CFO of 38 Studios that there were insufficient funds in the account to cover the check, EDC returned the check to 38 Studios,” Christine Hunsinger, a spokesman for Governor Lincoln Chafee, told The Providence Journal on Thursday. “EDC remains willing to accept payment with readily available funds.”

Late Thursday, Schilling took to his Facebook page to offer a few words on the situation.

“To all the prayers and well wishes to the team and families at 38, God Bless and thank you! We will find a way, and the strength, to endure,” he wrote.

But some people aren’t offering an well wishes.

“We got hoodwinked; we got played,” Republican state Representative Robert Watson told the Globe. “How many millions of dollars does Curt Schilling have? He can’t write a check? It’s Rhode Island that is supposed to provide the money? I think not.”

On Friday, Globe columnist Brian McGrory unloaded on Schilling, who over the years has made no secret of his conservative politics.

“Schilling spent no small amount of time in his career preaching the Republican mantra of smaller government and personal responsibility. He did this fresh off the historic Red Sox World Series win when he backed George W. Bush in the 2004 campaign. He did it on the stump on behalf of John McCain in 2008,” McGrory wrote. “Smaller government? Call me crazy, but I’m betting that wasn’t exactly what Schilling was extolling when he sat behind closed doors on Wednesday pleading with the members of the Rhode Island Economic Development Corp. to put more public money behind his fantasy video game venture.”

How fucking stupid is the state of Rhode Island to be giving out such large sums of money to such an utterly worthless "business" venture? And just how big a fucking hypocrite is Curt Fucking Schilling? And why don't the morons who support wingnuts and teabaggers ever fucking catch on that they are being totally conned by fuckers like him?

But wait, it gets worse. Here's Deadspin with what it all means:


Here's what this means: 38 Studios doesn't owe another payment until next May. More than that, the company is now in good standing and becomes eligible for tax credits. The governor doesn't like it, but those were the terms of the loan. 38 Studios has applied for more than $20 million worth of tax credits spanning two years, credits they've already said they plan to sell to another firm for cold hard cash.

C'mon Governor Chafee, grow a pair. If that sniveling little worm, Chris Christie, can go all Tony Soprano on the "Snookie" tax credit down in New Jersey, certainly you could put an end to this abomination if you really wanted to.


Bonus: Just because the Dropkick Murphys are from Boston...Curt Schilling is as full of shit as the narrator in this song