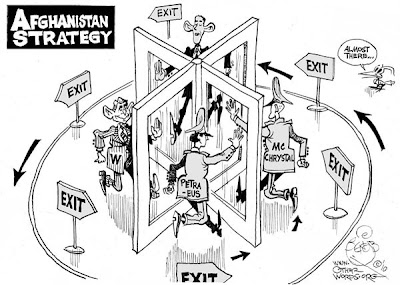 When it comes to issues of real importance, those involving unwavering support for big business war and empire, there is absolutely no difference between the two parties. This obvious but far too little acknowledged truth was on full display yet again this past week when the House of Representatives voted down a measure that would have resulted in an immediate exit of combat troops from Afghanistan. Here is Common Dreams with the story:


By a vote of 303-113, the US House of Representatives rejected an amendment by California's Barbara Lee (D-Oakland) on Thursday that would have swiftly ended combat operations in Afghanistan by limiting funds only to the "safe and orderly withdrawal of U.S. troops and military contractors from Afghanistan."

Congresswoman Lee (D-CA) discussing her amendment to end the war in Afghanistan.

The amendment was among dozens debated during passage of the 2013 National Defense Authorization Act (NDAA).

"The American people are far ahead of Congress. It's past time to end the war and bring the troops home," Lee said ahead of the vote. "My amendment allows Congress the opportunity to stand squarely with the war-weary American people who want to bring our troops home. The call has been growing across this land to bring this war to an end. It's time now for the Congress to answer the call here today." It was not to be.

An Associated Press-GfK poll released last week showed that backing for the war has hit a new low and is on par with support for the Vietnam War in the early 1970s, reports the Christian Science Monitor. Only 27 percent of Americans say they support the war effort, and 66 percent oppose it, according to the survey.

So, 66% of the American public oppose the continuation of the Afghanistan war and yet over 56% of their supposed Representatives voted to continue the war anyway. Some great democracy we have going here.

One thing the article failed to mention was just how many Democrats voted against the measure. So I went to the House website to find out. All told, 79 House Democrats cravenly voted to keep the war going and 10 more were too chickenshit to vote (including the Democratic party chairwoman, the hideously obnoxious Debbie Wasserman-Shultz). In fairness, 12 Republicans, including Ron Paul, actually voted in favor of the amendment. With this number of "aye" Democratic votes, it wouldn't have mattered if that sellout party was still in control of the House, the measure would still have failed.

All we keep hearing in the mainstream media is how hopelessly gridlocked Washington is these days and how bipartisanship is dead. Great line to sell to the idiots who don't pay attention. Unfortunately, it isn't true at all. For when it comes to supporting the true agenda of the billionaires who really run the country, you can absolutely count on a bipartisan majority to emerge every single time.


Bonus: From my You Tube channel - "Another day to face up...another day to wake up...on the feed kill chain"