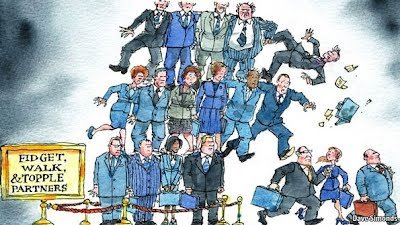 Here's a story I gather won't generate a whole lot of sympathy. Yahoo News has the details:


The crippled law firm Dewey & Leboeuf LLP filed for chapter 11 bankruptcy protection Monday night and will seek approval to liquidate its business after failing to find a merger partner, marking the biggest collapse of a law firm in U.S. history.
Once one of the largest law firms in the U.S., Dewey has been hit by the loss of the vast majority of its roughly 300 partners to other firms amid concerns about compensation and a heavy debt load.

Dewey had warned employees earlier this month of the possibility the firm may shut down, and a person familiar with the matter had told Reuters that the firm was considering a bankruptcy filing.

"Dewey's failure is rocking the industry in the sense that most firms are saying to themselves, if Dewey could go down, could we?" Kent Zimmermann, a legal consultant at the Zeughauser Group, said in an email Monday night.

Dewey said in a filing it had decided to wind down its business following unsuccessful negotiations with other law firms to strike a deal. It said it would ask about 90 employees to remain on staff to assist in the liquidation, which it expects to be completed in the next few months.

Gee, that's too bad. So what was the cause of the firm's sudden downfall?


The firm's collapse is expected to be the subject of years of court proceedings, and a number of former partners have already retained lawyers to represent them.

Monday's filing follows months of turbulence, as wave after wave of partner defections shattered the high-profile firm from within. In April, the Manhattan District Attorney's office launched a criminal probe of former firm chairman Steven Davis. He has denied any wrongdoing.

The result of a 2007 merger between Dewey Ballantine and LeBoeuf, Lamb, Green & MacRae, Dewey & LeBoeuf had about 1,450 attorneys at its peak, according to The National Law Journal.

But the firm was eventually undone by a combination of the economic downturn, excessive compensation and governance problems, according to former partners and others in the industry. In particular, Dewey's management promised millions in packages to about 100 partners, according to the court filing, leaving it strapped for cash when revenues fell during the recession.

"The full extent of the partner compensation arrangements is subject of continuing investigation," Mitchell said in the filing.

So, rapid expansion right into the teeth of the Great Recession and top management squeezing the the juice out of the firm with excessive compensation packages. Where have we seen this before? Oh that's right, all across every sector of the economy these days.


Bonus: They're probably not in love anymore