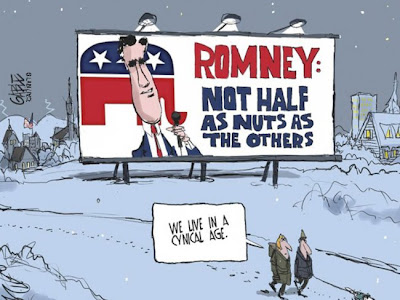 There was more sound and fury reported from the presidential campaign yesterday designed to get liberals and progressives all hot and bothered after Romney declined to "correct" a dimwitted audience member who asserted that Obama should be tried for "treason." Here is Gawker with the details:


What do you do when your party's base is made up of scared old white people who believe that the president is a traitor? You never, ever, ever correct them, and you talk a lot about God. Take Mitt Romney's example!

"We have a president right now that is operating outside the structure of our Constitution," the audience member said to applause. "And I want to know — yeah, I do agree he should be tried for treason — but I want to know what you would be able to do to restore balance between the three branches of government and what you are going to be able to do to restore our Constitution in this country."

Romney didn't correct the woman, choosing instead to address the question she posed.

Romney later said that "of course" he doesn't believe that Barack Obama is a traitor: "I don't correct all of the questions that get asked of me." No, of course not.

Well, first off, the question is dumb because a president who is "operating outside the structure of the Constitution" is committing an impeachable offense, not treason. BIG difference.

Secondly, here is the answer Romney should have given to the question were he at all honest:

"Well, OF COURSE Obama has been operating outside of the structure of the Constitution, just as his predecessor did for nearly eight full years after 9/11 and just like I intend to do if I get elected this November. That's what the War on Terror is really all about. So sit your tired old ass down and STFU."
Posted by Bill Hicks at 12:32 PM