49% Of Americans Aren't Saving For Retirement 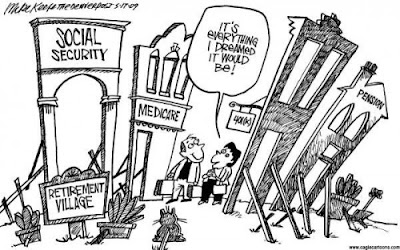 From the No Shit, Sherlock Network CNN, here comes a report that shows just how dire our collective long term economic predicament really is:


America has a serious problem saving for retirement.

About 49% of Americans say they aren't contributing to any retirement plan, according to a new survey conducted by LIMRA, a trade association for the financial services industry.

"The findings from this survey were disturbing, given that people will increasingly need to rely on their personal savings to make ends meet in retirement," said Matthew Drinkwater, associate managing director at LIMRA's retirement research division.

People ages 18 to 34 are the least likely to be saving, with 56% reporting that they are not currently contributing to a retirement plan like an IRA or a 401(k).

"In order to have the adequate savings necessary to meet their financial needs in retirement -- which could last 20 or more years -- it is critical that these individuals begin saving systematically early in their working years," Drinkwater said.

So what is the reason that so many people are being so neglectful in preparing for their future?

Nearly half of consumers said they aren't planning to contribute to an IRA because they can't afford to, and only a quarter of Americans have worked with a financial professional to plan for retirement, the survey found.

In order to "work with a financial professional to plan for retirement" you gotta have something to plan WITH. If you don't have jack shit, you can't very well make a plan with it. What's maddening is just how much difficulty the mainstream media seems to have in grasping this basic concept.
Posted by Bill Hicks at 5:59 PM