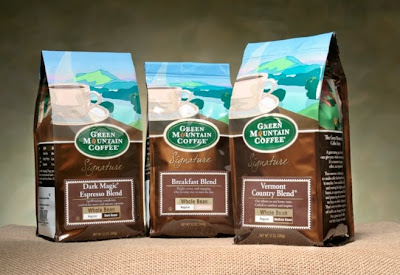 The big news in the stock market this week was the plunging sales of Green Mountain Coffee, which caused the company's stock to sink dramatically. Here is CNN with the story:

The company's quarterly earnings came in line with expectations at 64 cents a share, though its $885 million in sales missed estimates of $972 million.

As usual in these situations, the suits don't have a clue:


In a conference call with analysts, Green Mountain executives said they didn't have a full explanation for why sales were weaker than expected. They suggested that low brewer machine sales and weak demand for holiday drinks during the warm winter -- like cider and hot cocoa -- were partially to blame.

It was one of the fastest-growing companies of the past decade and one of the best-performing stocks, handing investors 110% gains on an annualized basis until last fall.

Please allow me as a former Green Mountain customer to offer up a possible explanation. I used to love Green Mountain coffee after having discovered it more than a decade ago when it was still a small regional concern. I even went out of my way to order it online back when it was not available in the stores in my area.

Nowadays, I can even buy it in my local supermarket. But I don't. In fact, I ordered up my last ever batch of the stuff about a year ago. And you know why? Because the coffee now tastes like ass. I don't know what the difference is between how they make the stuff now and how they made it a decade ago. All I know is what my tastes buds tell me.

Somewhere along the way, Green Mountain became far more concerned with expansion than it did about putting out a good product. But that is par for the course in corporate America these days.