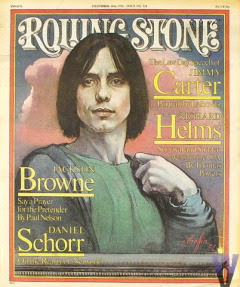 Many thanks to reader eggdogg over at the Hubbert's Arm discussion boards for posting this as an interesting topic of conversation.

As a lifelong fan of rock and roll, I was for many years a subscriber to Rolling Stone magazine, which used to be the bible of rock music. For Rolling Stone, writing about rock and roll was about more than just the music, it was about the writing. Take for example, this original review of Jackson Browne's classic 1974 album, Late for the Sky:


Like Browne's two previous albums, Late for the Sky contains no lyric sheet. The three or four hours required to make a full transcription will, however, be well worth the effort for anyone interested in discovering lyric genius. I can't think of another writer who merges with such natural grace and fluidity his private and public personas in a voice that is morally compelling yet noncoercive.

Late for the Sky, Jackson Browne's third Asylum album, is his most mature, conceptually unified work to date. Its overriding theme: the exploration of romantic possibility in the shadow of apocalypse. No contemporary male singer/songwriter has dealt so honestly and deeply with the vulnerability of romantic idealism and the pain of adjustment from youthful narcissism to adult survival as Browne has in this album. Late for the Sky is the autobiography of his young manhood.

The album's eight loosely constructed narratives rely for much of their impact upon stunning sections of aphoristic verse, whose central images, the antinomies of water and sand, reality and dreams, sky and road, inextricably connect them. Browne's melodic style, though limited, serves his ideas brilliantly. He generally avoids the plaintive harmonies of southern California rock ballads for a starker, more eloquent musical diction derived from Protestant hymns. Likewise his open-ended poetry achieves power from the nearly religious intensity that accumulates around the central motifs; its fervor is underscored by the sparest and hardest production to be found on any Browne album yet (Late for the Sky was produced by Browne with Al Schmitt), as well as by his impassioned, oracular singing style.

On side one, Browne tells bluntly about his personal conflict between fantasy and reality in erotic relationships, struggling with his quest for idyllic bliss. The title cut explores an affair at its nadir ("Looking hard into your eyes/There was nobody I'd ever known"), concluding with an image of the sky, the album's symbol for escape, salvation and death. "Fountain Of Sorrow" develops parallel themes of sex and nothingness, fantasy and realism, as Browne, looking at the photograph of a former lover, recalls: "When you see through love's illusion, there lies the danger/And your perfect lover just looks like a perfect fool/So you go running off in search of a perfect stranger." In the chorus, highly romanticized sexuality becomes a "fountain of sorrow, fountain of light." Later in the album the water images are developed into a larger metaphor for death and rebirth.

"Farther On" and "The Late Show" complete the first part of the song cycle. Locating the sources of Browne's exacerbated romanticism "in books and films and song," "a world of illusion and fantasy," "Farther On" defines Browne's quest as a "citadel" in "a vision of paradise." Its desolate conclusion finds Browne alone and older, "with my maps and my faith in the distance, moving farther on." By "The Late Show," Browne is so absorbed in despair that if he "stumbled on someone real" he'd "never know." Midway in the song, however, he meets a lover and in an impulsive gesture they drive away from the past in the "early model Chevrolet" pictured on the album cover.

The second side of the album describes the precariousness of the journey, as Browne's sense of personal tragedy metamorphoses into a larger social apprehension. "The Road and the Sky," a jaunty rock song, reintroduces the water motif: "Can you see those dark clouds gathering up ahead/They're gonna wash this planet clean like the Bible said." "For A Dancer," which follows, is one of the album's two master-pieces, a meditation on death that harks back to "Song For Adam" on Browne's first album: "I don't know what happens when people die/Can't seem to grasp it as hard as I try/It's like a song I can hear playing right in my ear but I can't sing/I can't help listening." But "For A Dancer" is not a lament; it calls for joyful procreation to combat metaphysical terror. Browne's graceful lyric, as fine as any he's written, finds its counterpart in the music, an ethereal tango in which David Lindley's fiddle dances against Browne's vocal. A crisp little rock song, "Walking Slow," celebrates Browne's new-found domestic stability. "Before The Deluge," the album's summary cut, brings together in a comprehensive social context the themes of the rest of the album. A march for three voices — Browne, Lindley's fiddle and backup chorus — the song evokes the spiritual malaise following Woodstock:

The verses are linked by a moving secular prayer for music, shelter and spiritual sustenance: "Let creation reveal its secrets by and by/When the light that's lost within us reaches the sky." This chorus's final statement follows a verse so imagistically potent as to suggest literal prophecy:

Reading that review again, I could actually hear those bittersweet sounds and words in my mind, so evocative are the descriptions. Obviously, Rolling Stone is not written for intellectuals, and yet publisher Jann Wenner was able to build a media empire by regularly providing this kind of thoughtful, well written content.

So how is it going now, less than four decades after that review appeared? Let's check a recent Rolling Stone review for the album, Neck of the Woods, by the Silversun Pickups:


On their two previous discs, this L.A. band tapped into the shoegaze majesty of peak Smashing Pumpkins and My Bloody Valentine. There's a little more digital burble coursing underneath the guitar haze this time out. Dance beats undergird the Pumpkins power-pop of "Gun-Shy Sunshine" and "Busy Bees," while songs like "The Pit" recall the sheer, synthed-up alt-rock Garbage made big in the Nineties. It could be a blurry Xerox of old sounds, but singer-guitarist Brian Aubert infuses his songs with wispy drama, balancing moppy-haired brooding and bright, bracing fuzz-drunk melodies. On "Dots and Dashes (Enough Already)," he invites us to look into his "scrapbook of fantasies." They're all borrowed, but he makes each nicked noise his own.

Clearly, Rolling Stone no longer believes that it's readership has the attention span or the desire to read engaging reviews like they did back in 1974. And lest you think this is a trivial example, it very much parallels what has been happening in the news media during this time. No wonder so few people seem capable of engaging in any sort of nuanced thinking about any particular issue these days. If you can't summarize it in a paragraph, or God forbid a Tweet, they simply aren't interested.


Bonus: This song might be more relevant today than it was back in 1974