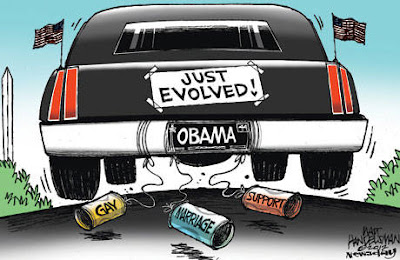 Liberals and progressives were all aquiver this past week with the announcement by President Hopey-Changey that after allowing his position on legalizing gay marriage to “evolve” for the last four years, it has now finally grown lungs and crawled out of the ocean. The reaction on the left was predictably ecstatic, while despondency just as predictably reigned on the troglodyte right. In other words, everyone was playing their expected parts in unison as if a grand maestro himself was directing the orchestra. Even Mitt Romney sang his lines without missing his cue, reemphasizing the tired old cliché about marriage being strictly between a man and a woman.

It was all such a perfectly choreographed piece of distracting political theater that it filled me with the urge to rise up in a one-man standing ovation, not for the President finally doing what a President should do—standing up for individual liberties—but because he manipulated his base so expertly and with the complete cooperation of his Republican opposition.

Whatever else he is, Obama is not dumb. He well knows that many of his core supporters are disenchanted by the way he turned his back on them in the economic and foreign policy arenas, and that young voters have become particularly discouraged with him. With this one move, President Sellout has gone a long way to winning back their confidence and to convince them that, despite his miserable overall track record while in office, he is really on their side after all.

The Republicans have correctly labeled this a big political ploy, but those are in fact crocodile tears they are shedding. Obama’s support for gay marriage is just the kind of gift they needed to fire up their own base, which is, to put it politely, less than thrilled with Romney. Most people who support gay marriage were unlikely to vote for Romney anyway, while those who oppose it are unlikely to vote for Obama. At this point, presidential politics is all about motivating your base to turn out on Election Day, and for Obama this was truly a mission accomplished.

But wait a minute, Bill. Regardless of the obvious cynicism surrounding this announcement, isn’t having Obama formally pledge his support for gay and lesbian rights a GOOD thing?

In vacuum, of course it is. But that is the problem with single-issue or narrowly focused voters across the political spectrum. By making their voting decisions based on just one or maybe a few key issues, especially the so-called "social" issues, they allow themselves on the whole to vote against their own best interests. In this instance, unless the gay or lesbian person who wants to get married is a millionaire or billionaire, Obama has been selling them down the river on every other important issue ever since the day he was inaugurated.

It is nice that the tide is finally turning on gay marraige, but what good does a marriage certificate really do for those who are unemployed and can’t find a job, or whose jobs have been sent to China to cut corporate costs, or who are working minimum wage jobs with no benefits, or who are burdened by a huge stack of student loans, or who are being foreclosed upon and are facing homelessness, or whose pensions are being looted, or whose social safety net is being shredded to spare the Pentagon any real budget cuts, or who live on a rapidly warming planet where the natural environment is being systematically destroyed? All of these are trends that will get MUCH worse in the coming years thanks to Obama’s policies of slavishly accommodating Wall Street and big business. True freedom, not to mention the pursuit of happiness, means a lot more than just the government granting you a license to get hitched.

The really laughable part is that Obama is now being lauded by mainstream liberals and progressives for finally showing some “backbone” and making such a “difficult” stand. Which just goes to show how little they really understand about how politics works these days in our post-Citizens United dystopia. Simply stated, there was nothing at all “difficult” or courageous about this decision. It was a purely political cost-benefit analysis. At the end of the day the millionaires and billionaires who support Obama don’t give a damn whether or not gay marriage is legal, or least not enough to close their checkbooks to him either way.

What they do care about is keeping the corporate welfare gravy train flowing uninterrupted, and as long as he pledges to do that all is well and good. Notice, in particular, that Obama has NOT made any “difficult” decisions regarding greatly reducing carbon emissions, or immediately ending the war in Afghanistan, or slashing Pentagon spending by 50% or more, or raising the capital gains tax rate to bring it at least even with the highest income tax rate, or aggressively prosecuting the Wall Street and banking criminals who crashed the financial markets.

As a result of this charade that once again presents Americans with the illusion of real electoral choice, tens of millions of liberals and progressives will dutifully trot off to the polls this November to cast their votes for the guy who now claims he supports gay marriage, while tens of millions of social conservatives will also do so in part to try and thwart the gay marriage “menace.” And through such cynical ploys will the election’s overall turnout percentage remain high enough to maintain the legitimacy of the whole corrupt political system. At this point, those of us in the reality-based community can only tip our hats to the maestro in acknowledgment at having witnessed such a beautifully played symphony.