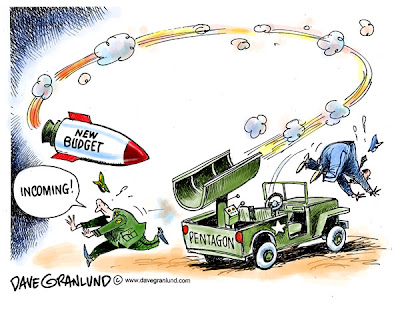 From The Raw Story, I've got your "austerity" measures RIGHT HERE:


The US Congress is poised to approve more funds for modernizing the US Army’s main battle tank despite objections from the military that it puts the Pentagon’s overall strategy in jeopardy.

In its 2013 budget proposal, which begins in October, the Obama administration requested $74 million to upgrade the M1A2 Abrams tank, which originally was intended for land warfare in the plains of central Europe.

But, just as it did last year, the Congress has turned a deaf ear to the Pentagon, with the Republican-controlled House of Representatives passing a defense authorization bill last week that adds an additional $181 million to the program.

In the Senate, Democrats have also gone way beyond the administration’s request and in the Senate Armed Services committee approved an additional $91 million for 33 extra tanks to be upgraded.

“The conundrum we have is that we don’t need the tanks,” General Raymond Odierno, the army chief of staff, told members of Congress.

“Our tank fleet is two-and-a-half years old (on) average now. It’s been recapped, its been reset, we’re in good shape, and these are additional tanks that we don’t need.”

The defense bill is expected to go to the Senate floor next week. The House and Senate versions, with their differing amounts for the Abrams, will then have to be reconciled.

Lawmakers say the additional spending is needed to keep production lines open at the Ohio factory where upgraded tanks are built. They say at least 70 tanks a year must be built for the factory to stay open.

However, Pentagon officials fear that in a time of budget cutbacks, the extra spending on the Abrams and other programs favored by Congress will undercut competing plans considered essential to the US strategy toward Asia.

“There is no free lunch,” US Defense Secretary Leon Panetta warned lawmakers earlier this month.

“And if members try to restore their favorite programs without regard to an overall strategy the cuts will have to come from areas that could impact overall readiness,” he said.

Blogger Charles Hugh Smith calls boondoggles like this part of a massive number of "make work" programs designed to try and keep people employed in a failing economy. But I can't think of a less beneficial form of make work program than building a bunch of tanks that the military doesn't even need. At a time when there is no conceivable conventional military threat to the U.S. anywhere in the world, this is sheer waste of resources is maddening in it's utter insanity.

If the government is going to continue to borrow obscene amounts of money to try and keep people employed, let's at least have them doing something useful like repair some of the nation's crumbling infrastructure. But no, somehow having the government employ people to try and maintain the common good is "socialism," wheras giving that same money to defense war contractors who would be out of business without it is as American as baseball and apple pie. Notice, too, that once again this is a bipartisan initiative from a supposedly hopelessly gridlocked congress. Just par for the course in Washington these days.


Bonus: "They're gonna rip it off...Taking their time right behind my back"