The Exiled: Failing Up With Citigroup's Dick Parsons 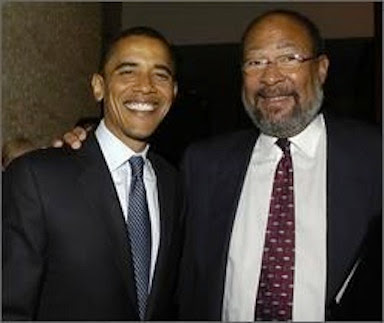 Mark Ames, editor-in-chief of The Exiled and all around journalistic rabble rouser, just came out with a blistering story recounting the sordid career of former Citigroup Chairman Dick Parsons. Parsons my not be as well known as such other Wall Street jackals as Lloyd Blankfein and and Jamie Dimon, but after reading Ames's account, I think you will agree he is every bit as bad if not worse. And as you can see by the picture above, Parsons has a lot of friends in high places.


Last month, shareholders finally rebelled against Citigroup, the worst of the Too Big To Fail bailout disasters, by filing a lawsuit against outgoing chairman Dick Parsons and handful of executives for stuffing their pockets while running the bank into the ground.

Anyone familiar with Dick Parsons’ past could have told you his term as Citigroup’s chairman would end like this: Shareholder lawsuits, executive pay scandals, and corporate failure on a colossal scale. It’s the Dick Parsons Management Style. In each of the three companies Parsons was appointed to lead, they all failed spectacularly, and somehow Parsons and a handful of top executives always walked away from the yellow-tape crime scenes unscathed.

This past April, for his final act as Citigroup’s chairman, Dick Parsons made sure that Citi’s top executives were handsomely rewarded for their failures. He arranged a pay package for CEO Vikram Pandit amounting to $53 million despite the fact that Citi’s stock plummeted 44% last year, and has woefully underperformed other bank stocks even by their low standards. Citigroup, as you might recall, got the largest bailout of any banking institution, larger than BofA’s– $50 billion in direct funds, and over $300 billion more in “stopgap” federal guarantees on the worthless garbage in Citi’s “assets” portfolio. Those are just the most obvious bailouts Citi received—this doesn’t take into account the flood of free cash, the murky mortgage-backed securities buyback programs, the accounting rules changes that allowed banks like Citi to decide how much their assets “should be worth” as opposed to what they’re really worth on their beloved free-market, and so on…

Again, with Parsons, it’s the same story every time: Three executive jobs, three disasters, each worse than the previous one.

Before Citigroup, Parsons headed AOL Time Warner, where he helped pull off what is widely considered the single worst business deal in corporate American history: a fraud-rife merger that wiped out $200 billion in shareholder value, ruined employees, retirees and investors, sparked numerous criminal investigations and dozens of lawsuits, and yet somehow managed to enrich a tiny handful of executives—including Dick Parsons—to the tune of hundreds of millions of dollars.

Why would the government agree to name the AOL Time Warner failure Dick Parsons, Chairman of Citigroup in January 2009, just as the world’s largest banking institution was taking the biggest bailout packages, and just as its legal ownership was taken over by the American public?

From the late 1980s through the mid-1990s, Parsons served as a top executive and then chairman of Dime Savings, the Northeast’s poster child for savings & loan criminal fraud. Dime was Parsons’ first executive job—and Dime turned out to be the New England region’s closest equivalent to Charles Keating’s Lincoln Savings, a giant criminal fraud mill with victims ranging from gullible low-income home buyers to entire regional economies laid waste to fraud-pumped housing bubble.

At least in the S&L crisis of the late 80s and early 90s, some people went to jail—and Dime’s affiliates in the New England states sent scores of fraudsters to prison. Those investigations led to Dime’s New York headquarters where Dick Parsons was, but for some strange reason, even with a federal judge openly demanding criminal charges for Dime’s senior executives, in the end, Parsons and the others got away with it.

Read the rest here.
Posted by Bill Hicks at 5:52 PM