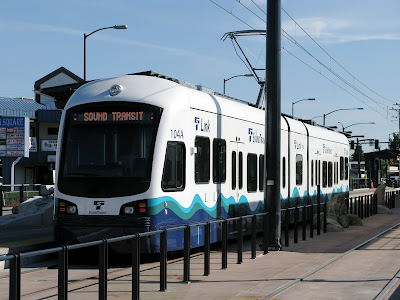 I've posted stories here before about copper thefts, but this one really takes the cake. Here is the Seattle PI.com with the details:

Thieves ripped the wire from inside an elevated guideway that supports the tracks, probably over the last several months. From end-to-end, about four miles of cable was stolen, Sound Transit spokesman Bruce Gray said.

"This isn't something that would have been done overnight," Gray said. "Whoever did this knew what they were going after and had some sophisticated knowledge of how to get in."

The wire runs along the guideway's hollow interior to protect it from low-level electrical current that strays from the rails, and directs it to the ground. The current would otherwise corrode the structure's rebar over time, Gray said.

Grounding for the train's power line is run separately. At no time was train service affected or the public in danger, Gray said.

Maintenance workers discovered the missing wire Thursday during track inspections. One worker noticed something out of place and went for a closer look.

While workers walk the tracks twice a week for inspection, the guideway's interior is inspected only once a year, Gray said. Thieves took advantage of that.

"There could be trains running overhead and track walkers out on top and they would never know someone was inside," Gray said.

The stolen wire probably was cut into segments of two or three feet in length, he said.

Make no mistake about it, this is the type of crime that happens to a society undergoing collapse. Whatever else you might say about whomever committed this crime, they are nothing if not industrious. It took a lot of hard work to pull this off. People clever enough and hardworking enough to get away with such a scheme wouldn't be risking going to prison like this if there was a more gainful way for them to make a living.


Bonus: "The sound of a train not running has been keeping me awake"