What A Shock: "Stand Your Ground" Apparently Only Applies To White People 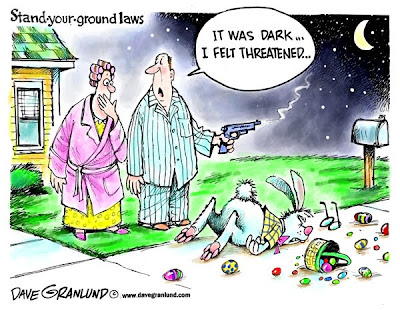 You might want to sit down before you read this, but it turns out that apparently Florida's hideous "Stand Your Ground" law only applies to white (or half-Hispanic) people who shoot others in self defense. I know, I couldn't believe it either. Here is Atlantic Wire with the details:


What happened to Marissa Alexander sure sounds a lot like 'standing your ground': her abusive husband came after her, choked her, and when she finally broke free, she grabbed a gun fired a single warning shot into ceiling ... so why is she set to serve 20 years in jail? As Touré points out, her husband's deposition had a similar account, though he's providing a newer, conflicting report.

Well, we imagine her prosecutor Angela Corey (who's also charging George Zimmerman) and her team, have the unfulfilling answers. The Florida Times Union's Charles Broward reported on April 21, "A judge denied [Alexander] immunity in a Stand Your Ground hearing. And after a jury found her guilty, she faces a mandatory term of 20 years in prison." Yes, there's the rage-inducing fact that Zimmerman who allegedly pursued and (not allegedly) killed Trayvon Martin was allowed to walk free that night while Alexander is going to spend 20 years of her life in prison for a single warning shot while in her own home. But it's also complex in that, those seeking justice for Trayvon Martin may have to side with a prosecutor who denied Alexander's (and the NAACP's) plea for a "stand your ground" ruling, like the one that was initially afforded to Zimmerman.

"There's a double standard with stand your ground," says Isaiah Rumlin, president of the Jacksonville Chapter of the NAACP. "The law is applied differently between African-Americans and whites who are involved in these types of cases." As Time's Touré points out, "there is one last sliver of hope left for Alexander: the court will soon hear arguments for a retrial." Jacksonville's News 4 added yesterday, "Judge James Daniel set a post-trial motions hearing for 8:30 a.m. Thursday. Daniel said if the motions are denied, she could be sentenced as soon as next week."

What is really appalling about this case is that Alexander should have been acquitted on grounds of self defense regardless of Stand Your Ground. But rather than argue about whether the law is being applied in a discriminatory manner, how about we just go ahead and repeal it already?


Bonus: I think The Fixx was in in this case...Bada Boom!