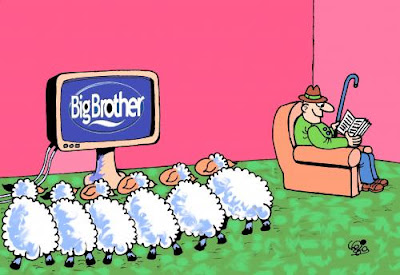 I've said before that I always find it amusing whenever someone residing deep inside the Hologram wakes up momentarily, looks around, and is horrified at just how grotesque our popular culture has become. Just this past week, writer Simon Doonan of Slate Magazine had such an epiphany, but managed to completely misconstrue the meaning of it all. Here's Simon:


My face bears an expression of extreme gravitas. I would appear to have the weight of the world on my shoulders. Want to get inside my head? Want to hear a snippet of my internal dialogue?

Yes, my head is filled with pathetically stupid thoughts about inconsequential people, and so, quite frankly, is yours. We are all in the same boat. And why on earth do we privilege the most superficial idiocies of popular culture over more substantial fare? The answer is simple: We have lost our fascination with accomplishment.

Whoa...I have to stop you right there, Simon, and chastise you for presuming to know what is inside my head. Maybe YOU spend your time obsessing over such garbage, but that doesn't mean everyone else out there does. In fact, the only reason I pay attention to our mindless pop culture at all is to use it as a measuring stick for just how far into the shitter our civilization has descended. That's what you would do as well if you were half as smart as you seem to think you are.


Superficial vamps and tramps and bimbos are nothing new, but, back in the day, they were forced to share the spotlight with more talented folks, exceptional folks. Marilyn Monroe married Arthur Miller, remember! Successful individuals from all walks of life were feted and garlanded and propelled into the spotlight. We were interested in their accomplishments. During the last century, consummate skill was HOT! Accomplishment was a veritable aphrodisiac. Now it would appear to have become a giant turnoff.

A younger person reading this might well roll his or her eyes and assume that some old gay codger is merely having a menopausal things-ain’t-what-they-used-to-be moment. But let me ask you this: When was the last time you saw a nuclear physicist or a world-class geologist on the red carpet? There was a time when it was not such a preposterous notion. In the past, accomplished people from a wide variety of disciplines were central to the culture. This is an objective truth.

I'll concede Simon's point here, and skip over his given examples in the interest of brevity. So why, Simon, do we find ourselves in this current state of affairs?


And what exactly do we celebrate today?

The question is, why? Why have we shoved all today’s accomplished people onto the back burner? Yes, we have Adele, but I am looking beyond the popular-music realm to the broad areas of accomplishment alluded to above and asking where, fer chrissakes, are the glamorous neurophysicists? Where are the charismatic, overachieving innovators and inventors? Steve Jobs? A unicorn! A lone example. You are going to have to do better than that if you wish to upend my hypothesis.

After extensive conversations with my inner Bertrand Russell, I have, of course, come up with a theory about the origins of this dire situation. Et voilà!:
We are living in an everyone-is-special-and-there-are-no-losers society. As a result, we are fearful of accomplished people because they can do stuff that we cannot do, and giving them the spotlight would un-level the playing field. We are, as a result, much more comfortable with the famous-for-nothing paradigm, because then, we, the great unexceptional masses, still have shot at celebrity.

What a load of GAR-bage. Simon seems to have not noticed that this trend he has documented so well in his article has occurred during a time when most of the American media has become consolidated among a handful of big corporations. The corporate media relentlessly pushes lowest common denominator entertainment as a distraction for the masses so that they won't pay attention the very real evils being perpetrated by their corporate masters nearly every single day...like the (ahem) multibillionaire who put up the dough to found Slate magazine.

The billionaire elite who run this country are not stupid. During the Vietnam War and Watergate eras they saw quite clearly how dangerous to the centers of power television in particular can be when the medium is at least partly in the hands of real journalists and other people who care about objective truth. Abby Hoffman knew it, which is why he once said, "A modern revolutionary group heads for the television station, not the factory. It concentrates its energy on infiltrating and changing the image system." That's what this relentless glorification of vacuous celebrities is all about. Corporate America cannot risk the media focusing on serious issues like our hollowed out economy, our rapidly changing climate, the degradation of the environment and wars being fought in the name of profits, so it gives the masses glitz and spectacle to keep their minds occupied instead.

All of this is the very essence of the Hologram. It wasn't created overnight, and it actually took the media moguls several decades to perfect it to the point where it now effectively stifles all opposition or even serious protest. These days, you can pretty much assume that anything you see on television is at a minimum being placed there as distraction. The truth is still allowed to be disseminated on the Internet and occasionally in print because those of us who actually read and are capable of critical thinking are such a tiny, atomized minority of the population. The truth of the matter is that the Hologram has grown so powerful that it can now, as Simon Doonan himself admits at the beginning of his article, overwhelm the critical faculties of anyone who has not completely removed him or herself from its influence. Yes, Simon, the truth is out here, but you've got to shut off the goddamned television once in awhile if you really want to see it.


Bonus: From my new You Tube music channel, you've got to stop before you lose it all