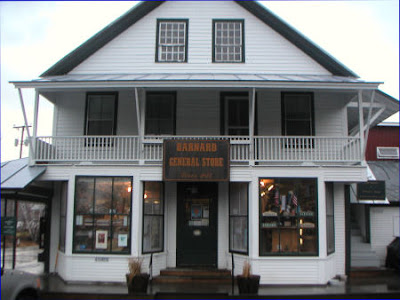 The bad economy combined with the effects of climate-change exacerbated weather disasters helped kill off a Vermont store that had been in business since Old Hickory was in the White House. Here is the Burlington Free Press with the details:


The Barnard General Store in central Vermont is closing its doors on Tuesday after 180 years in business.

The closing of the store that opened when Andrew Jackson was president, where for generations people have gone for news, food, more recently Internet service and the greater connection to each other and the community is more than just the closing of a business. It's located on the shore of Silver Lake at the intersection of state Route 12 and two town roads.

"It belongs to the town. It's a community place," DiCicco said.

DiCicco and her ex-husband bought the store 18 years ago after moving from Massachusetts with their two children, ages 10 and 12. Two years later, Furlong, a Maine native who likewise had moved to Barnard with a family, came on board. The two women now own the store together.

In 2004 the building and land were sold to another Barnard resident for $450,000. The cash helped dig the store out of a hole, DiCicco said. In 2008, a group of residents explored turning it into a co-op.

While the store struggled, it was Tropical Storm Irene and the nearly snow-less winter that pushed the store over the edge. The flooding made the town hard to reach and foliage season was a bust. Then the lack of snow kept away the snowmobilers, skiers and ice fishermen.

And so it goes.


Bonus: In tribute to the Barnard General Store, a song by the band Vermont