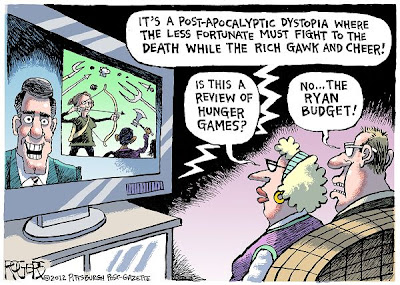 Make no mistake...when assholes like Paul Ryan blabber on about "austerity" what they are really talking about is making the less fortunate pay so that the corporate welfare gravy train can continue rolling along. How else can you possibly explain this report from Bloomberg:


A U.S. House panel voted to cut spending on food stamps, health insurance and other aid for the poor to avoid planned cuts in defense spending.

The spending reductions are triggered by a so-called supercommittee’s failure last year to come up with a plan to reduce the government’s $1.2 trillion budget deficit. About $55 billion would be subtracted from the Pentagon budget, with an equal amount from non-defense programs.

Also yesterday, the House Appropriations Committee unveiled plans to boost defense spending next year by $1 billion to $519 billion, with an additional $88.5 billion for the war in Afghanistan.

The Budget Committee’s measure would cut off food stamps to 1.8 million Americans, according to the Congressional Budget Office, while reducing assistance to millions more. About 280,000 children would no longer be automatically eligible for free school lunches because they receive food stamps, according to CBO.

The bill would give states more ability to pare their Medicaid rolls and would end social services block grants, which fund programs such as Meals on Wheels for senior citizens. The bill would tighten rules on who may claim child-care tax credits in an effort to prevent aid from going to illegal immigrants.

It's an election year, and yet these fuckers apparently believe that they will not suffer at the polls from such a blatant attempt to keep enriching defense war contractors at the expense of the most vulnerable members of our society. And the really sick part is, they're probably right.


From my You Tube channel: "Ain't this new world a shame...I can't stop thinking that it doesn't have to be this way"