John Edwards: A Peak Behind the Mask Of A Big Time Politician 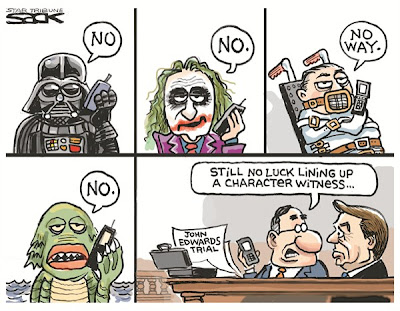 The John Edwards case has been an interesting sideshow during this political season. Actually, "freak show" might be a more apt term to use. Though Edwards is hardly the first politician caught with his wank in a crack where it shouldn't have been, what's unusual in this case is the level of sordid detail that has come spilling out during his corruption trial. I don't really care how Edwards spent his campaign funds. If you aren't a millionaire or a billionaire, donating to any politician is akin to pissing your money down the sewer. If he didn't use it to pay off his mistress, it would have gone to something else equally worthless.

That said, I did have a brief flirtation, so to speak, with Edwards early on during the 2008 presidential campaign. His standard "two Americas" campaign speech seemed to indicate that he actually understood the harsh economic realities so many Americans were facing even before the financial crash that year. As it turned out it was all a mirage, carefully constructed by yet another ego-maniacal political psychopath.

Consider for a moment, as this snippet from a Talking Points Memo indicates, just how far removed the "real" John Edwards has turned out to be from his previous public persona:


Here’s the 5 best pieces of evidence that make that case so far:

Edwards Referred to Hunter as a ‘Crazy Slut’

Former aide Andrew Young testified that Edwards called mistress Rielle Hunter a “crazy slut” after she told Edwards she was pregnant in June 2007. Young said Edwards told him there was “a 1-in-3 chance” that the child was his.

Edwards reached out to Sean Penn, Madeleine Stowe and Crash director Paul Haggis before admitting to fathering a child with mistress Rielle Hunter, former campaign speechwriter Wendy Button testified. Button helped Edwards work through 13 drafts of a statement admitting paternity in the summer of 2009 but did not end up admitting paternity until January 2010.

Former Edwards campaign adviser Leo Hindery testified that Edwards told him to reach out to then-Sens. Hillary Clinton and Barack Obama to make sure they knew he was up for the VP slot despite the unfolding mistress scandal. Edwards allegedly said he would trade his endorsement in exchange a spot on the ticket. Hindery testified that Edwards believed he could be attorney general if he wasn’t made vice president.

“We talked about a more elaborate long-term goal of Mr. Edwards, which was to be a Supreme Court justice,” Hindery testified.

Told Aide To ‘Go Fuck’ Himself

Edwards allegedly told Peter Scher to “go fuck [himself]” when he confronted him about the affair.

“I told him if it was true that he was having an affair with Ms. Hunter, he should not run for president,” Scher testified. “If it was true, eventually it would come out and it would destroy his political career.”

Bunny Thought Edwards Should Pay For His Own Girlfriend

Designer Bryan Huffman, an interior designer who is close with 101-year-old Edwards donor Bunny Mellon, testified that the heiress wasn’t one to judge someone having an extramarital affair but did have an opinion about how her money was spent.

“She thought maybe you should probably pay for your girlfriend yourself,” Huffman testified.

One point here should be plainly obvious, but because so few people seem to understand it I will repeat it: ALL big time politicians who rise to the level where they can at least consider making a serious run for the presidency these days are massive narcissists. You would have to be to put yourself through what they have to go through just to compete on that stage. The ones who win are the ones who are best able to deceive the public regarding their true nature. It is something every voter should consider before thinking they would "like to have a beer" with a particular candidate, or that because he is black he MUST be empathetic to the concerns of the average person.


Bonus: "I broke our home...and left you nowhere to run"