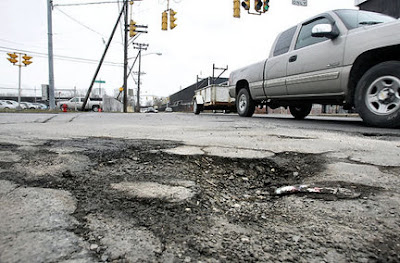 The days of Happy Motoring, as Jim Kunstler is fond of calling it, may be drawing to a close. Here is Bloomberg with the details:


Gil Giro doesn’t need a license plate to tell where a car is from -- he just looks underneath the chassis.

“Every time we see a car that comes in from the district, you can see that its suspension is torn up,” said Giro, the owner of Gili’s Automotive in Rockville, Maryland, outside Washington. “It’s almost like the vehicle has been driven off- road.”

The nation’s capital isn’t alone in offering motorists teeth-rattling rides as U.S. lawmakers tussle over how to pay the bill for mending battered roads. Mechanics such as Giro say they see the hidden tax car owners pay every day in torn tires, misaligned front ends and bent axles.

The U.S. Highway Trust Fund, which helps pay for road and transit projects in Washington and all 50 states, has been bailed out by Congress three times since 2008 for a total of $34.5 billion. The gasoline tax that supports the fund hasn’t been raised in 19 years, and with the cost of materials such as steel and asphalt on the rise, the fund is expected to have a deficit of about $10 billion this year.

Car owners already are shelling out far more than that to repair damage done to their vehicles by America’s ruined streets and highways, industry and academic researchers say.

That works out to $324 per licensed driver, says Frank Moretti, TRIP’s director of policy and research. The figure is an average of all vehicles and can vary widely between cars and large commercial trucks, which are prone to costlier damage, he says.

Karim Chatti, a professor of civil and environmental engineering at Michigan State University in East Lansing, estimates that damage linked to poor roads probably runs between $15 to $25 billion annually for car owners, not including tire damage and fuel-efficiency costs.

As a denizen of the DC-area, I can attest to how crappy the roads are around here. And this is happening in a part of the country where local tax revenues are still fairly robust because of federal government spending. I can't imagine what it must be like in some of the less well off locales. It's now a race to see what will destroy our automobile-centric economy first, high oil and gasoline prices, or our crumbling highways.