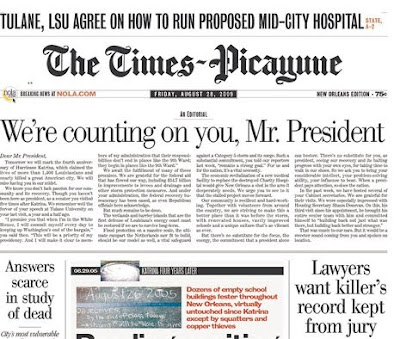 We know the newspaper business was in a technology driven downward spiral even before the crash of 2008. This day was perhaps inevitable, but that doesn't make it any less shocking. Here is the Atlantic Wire with the details:


The New Orleans Times-Picayune is facing massive budget cuts, including "wholesale layoffs" and a reduction in the publishing schedule that would leave the city without a daily print newspaper. The report from David Carr of The New York Times says that the paper's owner, Newhouse Newspapers, will likely cut the publishing days to two or three a week and replace or let go many of its top editors. According to the website Best of New Orleans, reporters who do stay will face "sharp salary cuts" and be expected to post most of their content online at the paper's website, Nola.com.

Current staff members say they learned of the news through The New York Times report or via Twitter. The cuts are being compared to Newhouse's treament of the Ann Arbor News, which was shuttered several years ago (after 174 years of publication) and is now only available online. The company famously claimed a "no layoffs" policy for years, but rescinded that rule in 2010.

The loss of the Times-Picayune is particularly painful for New Orleans, which has relied heavily on the paper for its investigative reporting in the aftermath of Hurricane Katrina. The paper won the Pulutzer Prize in 2006 for public service reporting, even after power failures from the storm prevented the printing presses from running for three days. Like many of the city's institutions, the paper never fully recovered, but continued to provide valuable coverage of stories city corruption and frustrating rebuilding efforts, such as the story of Danziger Bridge shootings and a recent series on state prisons. The Times-Picayune first began publishing in 1837.

The news comes a day after Oregon University's student paper the Daily Emerald announced that it will end its "92-year streak as a Monday-to-Friday newspaper," but under very different circumstances. The paper will be shifting most of its resources online, cutting back to two print editions a week, along with occasional special editions. The paper insists this "is not a move made out of financial desperation," but one made with the future of the industry in mind and as a preemptive effort to focus on the growing digital audience. Perhaps the Times-Picayune will be able to adapt and thrive in an online-only world, but given Newhouse's recent history with the Ann Arbor paper, the initial response is not optimistic.

People who have become addicted to getting all of their information online will shrug and say, "What's the big deal?" The big deal is twofold. First, not everyone can afford Internet access, and this is just another way that the poor will now be isolated from the mainstream of society. Secondly, since no one has figured out a way to build a truly robust online news outlet that doesn't glean most of its information from more traditional media sources, this action sounds the death knell for whatever remains of true journalism at a time when the propaganda influence of the national media Hologram is becoming omnipotent.

I've been highly critical on this blog of the way newspapers have followed the lead of television news and have become much more superficial in their news coverage in recent years, but I do recognize this action portends a very dark future in which getting real information about what is really going on in many communities will be well nigh impossible.
Posted by Bill Hicks at 5:44 PM