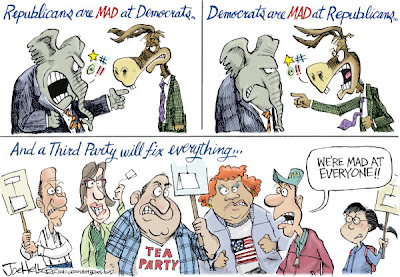 I hate to say "I told you so," but back on November 4th of last year in my post, "Friday Rant: Why the Americans Elect Third Party is Another Really Bad Idea" I explained why this particular third party effort was an exercise in sheer wankery. And now, here comes the proof in this story from Talking Points Memo explaining why Americans Elect crashed and burned:


“None of the above” will now be the only real option for voters frustrated with the tired choice between two parties now that Americans Elect, the well-funded nonpartisan organization that sought to nominate a legitimate third-party candidate for president in 2012, has folded. (Only Nevada has an actual “none of the above” option on the ballot.)

It seems that the inability to create a movement in this vein was less about the sentiment — polls show Americans are aren’t fans of either party specifically or the political process generally — but it was lacking a key ingredient: leadership.

“You can’t fill a political vacuum with a concept,” Lee Miringoff, assistant professor of political science and director the Marist College Institute for Public Opinion, told TPM. “The context is there, and the climate is right, but you need someone you can look at, a person, a candidate. Politics has become much more about personal qualities of individuals.”
Americans Elect announced last week they were unable to field a presidential candidate, due to a lack of interest and an online nominating system that only the most committed third-partiers could seem to the figure out.

The organization drew serious financial backing to the tune of $35 million from major donors, who mostly remained anonymous due to the group’s status as a 501(c)4 rather than a political entity, although one major donor who surfaced was hedge fund billionaire Peter Ackerman, who gave $5.5 million to the cause. And organizers didn’t lack for ambition — Americans Elect had a stated goal of qualifying for the ballot in all 50 states — it ultimately got 27.

But the biggest draw and the largest failure was in finding an actual candidate. Organizers had offered up the names of some of the most well-known political centrists — New York Mayor Michael Bloomberg, Maine Sen. Olympia Snowe, former Indiana Sen. Evan Bayh and others. None expressed interest.

The group’s web-only procedure contributed to its downfall, creating two specific shortcomings. There wasn’t much interest in the candidates who actually said they would accept a nomination under the organization’s banner (former Louisana Gov. Buddy Roemer, for instance) and attempts to “draft” candidates produced only pols who have been heavily involved in national politics before - including candidates from this presidential cycle: Rep. Ron Paul (R-TX), former Utah Gov. Jon Huntsman, Independent Sen. Bernie Sanders (VT) and even President Obama.

Gee, who would have ever thought that a third party effort backed by billionaires with the intention of putting yet another bland, mealy-mouthed centrist candidate on the ballot might not inspire any actual voters. Given that President Hopey-Changey himself is in reality a right-of-center politician, there is really no point in trying to capture the false "middle" between him and the Republicans.

The far left, of course, is completely unrepresented in American politics and WOULD be fertile ground for a viable third party effort, but no billionaire is ever going to support any movement which would favor confiscating much of his or her wealth. And given how little understanding most people on the left seem to have of the issues of peak oil and resource depletion, such an effort would hardly have any realistic solutions anyway.