Bank Of America To Lay Off An Additional 2,000 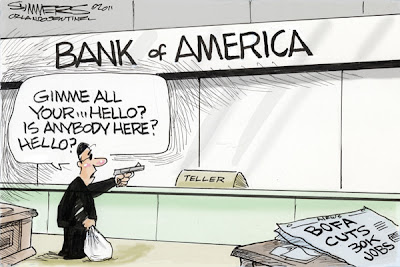 Try not to get too choked up when reading the snippet for this report today from the Wall Street Journal:

The Charlotte, N.C., company is planning about 2,000 staff cuts in its investment banking, commercial banking and non-U.S. wealth-management units, said people familiar with the situation. Those operations were vastly expanded with Bank of America's 2009 purchase of Merrill Lynch & Co.

Usually, I have have plenty of empathy for the people who lose their jobs after these announcements, but I'll make an exception in this case. Had the federal government not bailed out this hideous company back in 2008, and let them fail as they should have, these people would have been out of a job already. But here is the most delicious part of this story:


The reductions are significant because of whom they target: the high-earning employees whose efforts helped Merrill Lynch account for the bulk of Bank of America's profit since the financial crisis.

They say there is no honor among thieves. I guess they're right.


Bonus: "Don't cry no tears around me"