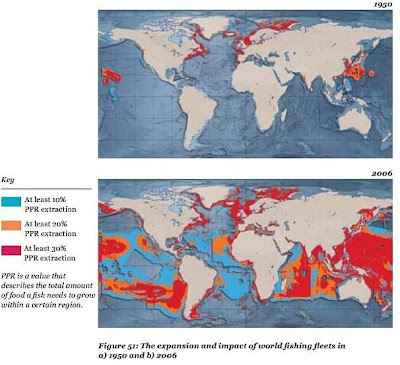 Over the weekend, the Washington Post ran the above chart as part of a brief blog post covering the topic of Peak Fish:


Between 1950 and 2006, the WWF report notes, the world’s annual fishing haul more than quadrupled, from 19 million tons to 87 million tons. New technology — from deep-sea trawling to long-lining — has helped the fishing industry harvest areas that were once inaccessible. But the growth of intensive fishing also means that larger and larger swaths of the ocean are in danger of being depleted.

Daniel Pauly, a professor of fisheries at the University of British Columbia, has dubbed this situation “The End of Fish.” He points out that in the past 50 years, the populations of many large commercial fish such as bluefin tuna and cod have utterly collapsed, in some cases shrinking more than 90 percent (see the chart to the right).

Indeed, there’s some evidence that we’ve already hit “peak fish.” World fish production seems to have reached its zenith back in the 1980s, when the global catch was higher than it is today. And, according to one recent study in the journal Science, commercial fish stocks are on pace for total “collapse” by 2048 — meaning that they’ll produce less than 10 percent of their peak catch. On the other hand, many of those fish-depleted areas will be overrun by jellyfish, which is good news for anyone who enjoys a good blob sandwich.

The full WWF report , meanwhile, is chock full of brightly colored graphs charting the decline of wildlife across the globe. All told, global vertebrate populations have declined by some 30 percent since 1970. But that number masks a lot of variation. Wildlife actually appears to be recovering in the temperate areas, while it’s utterly collapsing in the tropics. (It seems there have been some modest conservation successes in the wealthier temperate regions — the European otter is staging an impressive comeback, for instance.)

The big thing the WWF paper emphasizes, however, is that human consumption patterns are currently unsustainable. We’re essentially consuming the equivalent of one and a half Earths each year. This is possible because we borrow from the future, as is the case with fish — one day the world’s fish population may collapse, but there’s plenty for us now. WWF doesn’t quite call it a Ponzi scheme, but that’s the first metaphor that comes to mind.

Wow--a pretty grim assessment. Too bad Professor Pauly had to go soft at the end:


So is there any way to stop this slide? After all, it’s not like people can just stop eating fish altogether. Pauly, surprisingly, is fairly optimistic. He argues that strict government quotas on catches can help stop the slide. “There is no need for an end to fish,” he writes, “or to fishing for that matter.” (He’s not sold on aquaculture, or fish farming, since it often requires huge harvests of smaller fish to feed the big carnivorous ones in farms.)

And yet, the Post, actually gives a pretty realistic rebuttal to Pauly's optimism:


The hitch is that when governments have tried to institute such quotas in the past — as they’ve recently attempted with Atlantic bluefin tuna — the rules tend to get, uh, watered down under intense lobbying. Or else shadowy black sushi markets emerge to flout the rules. But no one said it was easy, halting the end of fish.

Of course, one could reasonably ask why this story was not plastered across the Post's front page as a screaming headline instead of being tucked away on Ezra Klein's Wonkblog (please note that it was NOT Klein who actually posted it), but I guess you have to start somewhere.

Of course, with any story like this, the reader comments can also be enlightening. Like this one:


large23220
5/20/2012 12:56 PM EDT
More lib crap-aganda. God told us to be fruitful, multiply, and take dominion over all the fishes of the sea. God didn't qualify that instruction with any touchy-feeling whale-hugging horse hockey.

There will always be enough fish sticks. God promised.