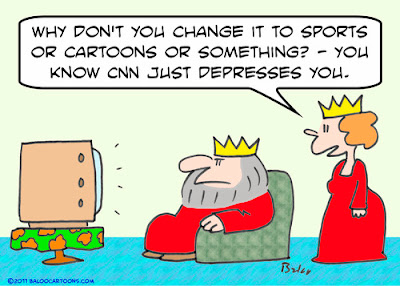 Liberal talk show host Ceyk Uygur had some advice for the former “Worldwide Leader in News” in a column he wrote last week about the network’s plummeting ratings. Here’s Cenk:


CNN just had their lowest ratings in a decade. They are in disastrous shape. When I was on MSNBC, we would beat them with a stick. Even after "pro-CNN" stories like revolutions in Egypt and Libya, Japanese nuclear meltdowns and the killing of Osama bin Laden (CNN does much better when major news or international stories break out), we still beat them. Now they're doing so poorly I might even catch them on Current.

We started at almost nothing on Current, but we have been steadily improving our numbers. Why are we getting traction? Because people want an alternative -- the real news. So, I should just stay quiet and let CNN drive off that cliff. By the way, when I catch Erin Burnett -- which is not that far off because I'm beginning to see her in the distance in the demos -- everyone will know it. Who knows, that might be the event that precipitates CNN re-thinking their entire model. Imagine if a network that started at nearly nothing catches CNN within a year.

But I am not going to wait until then to give them some friendly advice. I know they won't perceive it that way, but I am actually trying to help them. So here it is -- for the love of God, stop doing "he said, she said" crap that doesn't actually deliver the news to anyone. Democrats said this and Republicans said that -- who cares? What is the reality?! Your job is supposed to be to bring us facts, not what official spokespeople told you in their press releases and talking points.

The problem is that CNN doesn't have the courage to do this. They're afraid it might offend some folks if you tell the American people reality. I want to be clear; I'm not saying they should give us opinion. There's plenty of that in other parts of cable, including my show. They're never going to out-opinion me. But if Mitt Romney says his proposal balances the budget, well, why don't you crunch the numbers and tell us whether that's true or not? Of course the reality is that it creates trillions of dollars in deficits just so that the rich can have more tax cuts. But CNN would consider reporting those facts as being biased.

If the Giants play the Cowboys and beat them silly, it is not biased to report that they won. You don't have a pro-Giants bias if you report the score. I'm a progressive but I have no interest in CNN skewing issues in favor of Democrats. By all means, call them out just as aggressively. The Democratic Party takes huge amounts of cash from corporations and unions to vote a certain way. My God, CNN doesn't even cover the role of money in politics. They take politicians at their word. Are you kidding? It seems like the people who work at CNN are the last people in the country who actually trust our politicians. Congressional approval ratings were recently at 11 percent. How well do you think you're going to do on television if you're sucking up to those guys?

By the way, following along with artificially created Fox News scandals doesn't give you balance. It makes you sad and pathetic. There are plenty of real Democratic scandals without falling into the rubbish Fox talks about. How much money does Chuck Schumer take from Wall Street? What favors does he give them in return? Why do Democratic leaders keep writing legislation rigged against the Internet -- could it have something to do with the tremendous amount of cash they take from Hollywood companies? Why does President Obama get a free pass on following George Bush's civil liberties abuses like warrantless wiretapping and indefinite detentions?

In other words, do your job -- report the news. The real news, not dueling talking points and manufactured controversies. My God, where is your investigative team? What's the last story you broke? Of course, the reality is that you don't want to break stories about Washington because that might offend some people. What kind of a so-called news operation is this afraid of their own shadow? "Oh my God, what if we offended someone in power. They might not come on our shows anymore and they might call us biased." Or they might call you journalists.

There are a couple of important points to make here that Uygur completely misses in his article. First of all, what is the real reason CNN’s brass is so afraid that the network “might offend some people?” Does a global news operation, as Unger supposes, really have anything to fear by ruffling the feathers of some Senator or Congressman, or even the President? Is it the power of the politicians they are afraid of, or as is more likely, do they dread the possibility of angering their corporate bosses, who after all ultimately work for the billionaires whose contributions put the political puppets into office? Don’t piss off the boss is one of the very first rules that people learn when they join the American workforce.

Some might object and say that news organizations have ALWAYS been owned by corporations, and yet there actually was a time when despite that fact they often aggressively pursued stories that that made government officials or even corporate bigwigs look bad beyond just the latest titillating sex scandal. So what has changed?

Quite simply, it is the expectations of the viewer that have changed. Thirty years ago, when CNN was an upstart network first entering the television news landscape, the only other available outlets in America were CBS, NBC and ABC. Those were the days of titans of the medium, like Walter Cronkite, David Brinkley and John Chancellor—when Americans across the political spectrum shared a common perception of what was going on in their country and internationally as viewed through the lens of national news organizations that, while far from perfect, were at least outwardly dedicated to objectivity.

Since the arrival of CNN on the scene, to be joined later later Fox News and other cable outlets, to say nothing of the Internet, the American media landscape has been forever splintering into mutually exclusive audiences. These days, if you’re a Republican and a conservative you faithfully watch Fox News and get all of your information delivered with a Republican/conservative spin. If you are a liberal or a progressive, you watch MSNBC and/or the Comedy Central shows and get, if not a total lock step Democratic spin certainly a liberal/progressive one. It is easy for people caught in this dynamic to look at those on the other side as if they have two heads, because they literally perceive the world in ways that are diametrically opposed to one another.

The problem with advising CNN to start reporting “real news” as a way of boosting its ratings is that this dynamic has been going for long enough now that doing so would cause the network to be rejected by BOTH sides. The sad fact is that most people DO NOT WANT to hear objective truth anymore. They want information presented to them in such a way that panders to their preexisting prejudices and beliefs, and liberals and progressives are every bit as guilty of this phenomenon as are conservatives. Additionally, this dynamic not even include the many millions of people who only care about American Idol, the NFL season and the latest antics of the Kardashian sisters and won’t watch CNN at all unless it covers the never ending antics of vacuous celebrities. That’s your American media landscape these days—a third of the population devoted to one end of the political spectrum, a third just as devoted at the other end and a remaining third that doesn’t care in the slightest.

If you don’t believe me, just imagine for a moment what would happen if CNN were to do a completely accurate expose on the subject of Peak Oil. In order to do so, it would have to tell some truths unpalatable to conservatives—that oil, coal and gas are finite resources, that worldwide production of those resources is peaking and already choking off the possibility of long term economic growth, and that no amount of “drill, baby, drill” is going to change that fact. It would have to follow that with some truths unpalatable to most liberals and progressives, namely that “green energy” is a cruel pipe dream and that “alternative” fuels are not going to allow us to maintain our suburbanized, automobile centric economy. Imagine the reaction of both sides when the show wraps up by saying that our only hope to survive with our civilization intact is for everyone to immediately begin powering down and accepting a dramatic reduction in their standard of living. The days of carefree trips to the mall, motoring vacations every summer and having your own big backyard are over, and they’re never coming back.

Does anyone really think a show like that would be a big shot in the arm to CNN’s ratings? Sounds to me more like a recipe for the network falling into oblivion once the deluge of angry emails and text messages from viewers all across the political spectrum finally started to die down.

The small minority of us who live in what I call the “reality-based community” accept that the resources vital to maintaining and growing an advanced, globalized industrial civilization are rapidly depleting. “Real reporting” on just about any issue—from budgets and “austerity,” to unemployment, to the housing market, to our crumbling infrastructure, to creeping authoritarianism, to the Middle East uprisings, to the breakdown of our political system—has to be built upon that understanding in order to even hope to present our many problems in such a way that allows genuine solutions to be considered.

Because so few people have accepted that reality, “real reporting” will be rejected out of hand by the vast majority. Ultimately, CNN is a dinosaur that’s heading toward extinction thanks to a change in the media climate that it did so much to help initiate. But Cenk Uygur shouldn’t get too cocky. For when the glorious façade created by the Hologram does finally start to crumble, it won’t spare him or his Current TV viewers either.


Bonus: Here's Bill's take on CNN from 20 years ago