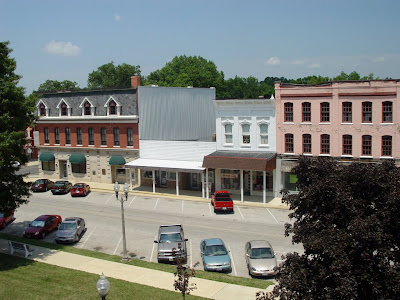 image: Downtown Carlyle, Illinois is about to become a little bit deader, thanks to a factory closing.

Back on January 8th, I posted a story about a Fortis Plastics plant closing in Ohio. Well, now it is Illinois' turn, as reported by my all time favorite business publication, Plastics News:

The company sent workers a letter dated April 9 warning that the plant will permanently close within 60 days. Employees were told their last day would fall in the period between June 9 and June 22.

State officials and the mayor of Carlyle have been notified of the imminent closing, and officials will be available to help assist workers who are losing their jobs, the letter said.

The shutdown apparently marks the final chapter for Fortis, which has been closing plants since at the end of 2011. Much of the equipment at the other plants was auctioned off in January and February.

A Fortis worker, who requested anonymity, said employees in Carlyle have been aware of the other plant closings, and had expected their plant to eventually shut down, too.

“I pretty much knew this was coming. It wasn’t a shock to me,” the worker said.

Other workers said the Carlyle plant had seen most of its molding work disappear in recent weeks, and that resin and other materials had occasionally been in short supply.

The Carlyle plant did medical-related work, among other projects.

I guess that advice that Dustin Hoffman received at the beginning of The Graduate is no longer valid.