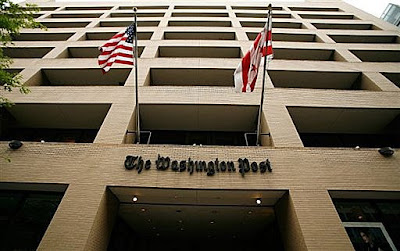 As a newspaper, the Washington Post has been coasting on its reputation for many years. The Post is now declining even faster than many other papers, and this report from Adweek shows that the paper's "leadership" doesn't have a clue as to what to do about it:


Washington Post staffers are buzzing about a secret meeting between some 10 big-name Post journalists including Dana Priest, David Finkel and Carol Leonnig, and Steve Hills, the president and gm of the newspaper. The April 17 meeting was highly unusual for two reasons—the executive editor, Marcus Brauchli, wasn’t present, and the participants agreed not to talk about it. They approached Bradley Graham, a former Post reporter (no relation to Post Co. chairman Don Graham) and Hills friend, who agreed to host the get-together at his Bethesda, MD, mansion. Graham said the journalists were “just interested in knowing him better. Steve isn’t as known to them as Marcus or other folks in the newsroom.”

Over sandwiches around the dining room table, the journalists expressed concern about the loss of newsroom resources. Accounts of the evening that are making the rounds suggest it was hardly comforting to their journalistic souls. Hills was said to have shocked with remarks that awards “don’t matter,” urged more traffic-driving slideshows over original Post photos, and compared the Post to Ohio’s Dayton Daily News, a paper with one-fifth the circulation of the 508,000-circ Post.

Hills, by email, wouldn’t get into specifics but downplayed the dinner’s import. “I was having a wide-ranging informal conversation at a dinner party with my colleagues, who happen to be some of the best reporters and editors in the business, about the challenges that we face,” he wrote. Graham, however, said that the Dayton comment came up in the context of a discussion about the Post’s future. Hills “made a number of comparisons to other markets with the idea of keeping in mind what a market the size of Washington might realistically support," Graham said of his friend. "That’s where the tension comes from. We’re not New York; we’re not Cincinnati.”

News of the meeting comes at a jittery time. According to the parent Washington Post Co.'s just-released earnings report, the newspaper lost $22.6 million in the first quarter of 2012, with print advertising down 17 percent. The paper's average daily circulation fell nearly 8 percent in the six months ended March 31, more of any of the top 25 U.S. dailies. With circulation and revenue falling, no less than investigative reporting is being scrutinized. The Post, where the legendary duo Woodward and Bernstein made their mark, is defined by its investigations; it was Bob Woodward who in 1982 set up the paper’s permanent investigative unit, now under the highly regarded Jeff Leen. Its members have been known to while away years in the unit, apart from the rest of the newsroom.

But the paper has lost top talent lately, including James Grimaldi, who took a buyout and is heading to The Wall Street Journal. With his departure, the Post will have lost all three reporters who won its 2006 Pulitzer for their coverage of the Jack Abramoff scandal. The paper also shut out of the 2012 Pulitzers and weathered a blogger embarrassment that revealed its BlogPost operation to be a mini sweatshop. As the Post looks to cut costs, there’s been debate over whether the paper should spend more time on shorter projects that bear fruit faster and even speculation that the unit might be disbanded altogether. “There’s been talk in the newsroom that there’s been pressure to report more quickly,” said Patrick Pexton, the newspaper’s ombudsman.

Personally, I cancelled my subscription to the Post years ago after becoming disgusted with the dominance of Iraq War-drumbeating neoconservatives on its op-ed pages. I would say that the paper cutting back on "real reporting" is exactly the opposite of what it should be doing to retain readership, but that likely isn't true. The sad fact is that the vast majority of Americans are not interested in hearing the truth about anything anymore. If the Post really wants to increase its web traffic, it probably ought to just give itself over completely to being a tabloid rag like Britain's Daily Mail and be done with it already.


Bonus: "Your lives are in danger"