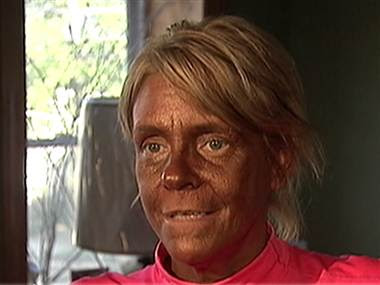 It's pretty much a given that the mainstream media these days will focus on whatever triviality it can to distract the masses from the creeping effects of our unsustainable industrial civilization's very dire resource predicament. Usually in this ongoing effort, the Hologram focuses on the trials and tribulations of various vacuous celebrities--and that's fine as far as it goes. The attention whores aren't apt to complain about the white hot spotlight, and have layers of private security to protect them against any unhinged freak who might come after them as a result of all the unwarranted publicity.

But once in awhile, an ordinary person gets their life turned upside down because they were in the wrong place at the wrong time and managed to do something the gatekeepers deem "newsworthy." Take, for instance, the example of Patricia Krentcil, the so-called "Tan Mom," who is apparently guilty of exercising bad parenting judgement and is certainly guilty of having an unhealthy addiction to tanning beds. Bad parenting happens every day in this country, unfortunately. Except Krentcil had the misfortune of having her very unimportant case become subject of yet another asinine media frenzy. Here is The Raw Story with the details:


After being charged earlier this month with child endangerment for allegedly putting her 6-year-old daughter on a tanning bed, an alarmingly bronzed New Jersey woman came to national prominence, and she hasn’t had a moment’s peace ever since.

Now the butt of endless jokes, Patricia Krentcil, 44, is getting a little sick of it all. She’s been featured on late night talk shows, had an action figure made in her likeness, and even endured a ribbing by Saturday Night Live.

Speaking to NBC’s Today on Tuesday, Krentcil said she wants America to know that despite her appearance, she’s still a good mother.

I’m up at 3:00 in the morning making sure all the wash is done, my husband goes to work at 4:30,” she explained. “[He] works on wall street, and then I make pancakes, pack [the kids'] bags, and they’re all off and gone, and then I work all day inside and outside of this house.”

Krentcil added that her daughter, Anna, got a sunburn after playing in a pool on a sunny day — and not from going into a tanning bed with her mother. “She’s a redhead,” she said. “She got sunburnt.”

“We’re fighting these charges because I’m not guilty,” Krentcil insisted. “Every allegation was completely wrong, and I just want people to leave us alone.”

Maybe Krentcil is guilty, maybe she isn't. The point is that her guilt or innocence in this particular case is of no fucking consequence to anyone outside of her immediate family. Make no mistake, the media jackals have made a spectacle of her for one simple reason: because she looks like a freak. She is yet another woman whose physical appearance is being gleefully used as a weapon against her by cretins with no moral compass.

Sadly, that is the state to which the American media has descended--a fucking high school gossip mill where the good looking and popular kids bully and mock the "geeks" and "freaks" and everyone else is too afraid that they will be next not to join in the cruel laughter. Everyone who has been taking pleasure in voyeuristically reveling in this poor woman's travails ought to be ashamed of themselves. Really, is your life THAT fucking empty of meaning? Are you THAT fucking addle-minded that you don't instinctively recognize what an abomination it is to make a laughing stock out of this particular loser nobody? After all, it's not like she murdered or molested her daughter, or, oh I dunno, gave the order to drop a drone missile on top of her.

Lest you think I am overreacting to this story, you'll recall that yesterday I posted an article about how Sandra Fluke received some extremely vile and malicious Twitter messages from some fucking douchebag asshole who has never met her whose hatred of her was deliberately whipped up by the right wing's pretty hate machine. Is it really too much of a leap to imagine that Patricia Krentcil could possibly get physically attacked by some whackjob who is frothing at the mouth at thought of the "horrible" way she abused her daughter? Unlike, say, Paris Hilton or the Kardashian sisters, Krentcil isn't a multimillionaire who can afford to hire a phalanx of bodyguards to keep the nuts away from her and her unfortunate family.

For the American media, the hyping of this non-story represents yet another new low. But don't worry, I'm sure there are plenty of teevee "news" producers and reporters out there right now, sniffing around, searching for ways to lower the bar even further in their mad race to the bottom of the barrel.