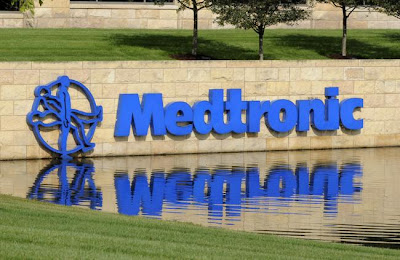 Yet another mass layoff notice from the health care industry, as reported by Twin Cities.com:


Fridley-based Medtronic is eliminating about 220 jobs in its division for heart rhythm devices.

The business unit, which is headquartered in Mounds View, makes pacemakers and implantable cardiac defibrillators, which shock failing hearts back into rhythm.

Sales of the heart devices have been sluggish for years. In previous years, Medtronic also has announced job cuts during the month of May, shortly after the close of the company's fiscal year in late April.

"They have to keep right-sizing the business to reflect the future prospects," said Tim Nelson, an analyst with Nuveen Asset Management. "I think this was a lot of Minnesota-focused people. It came with a pretty significant reorganization in product development."

Medtronic employs about 8,000 people in Minnesota.

Kathleen Janasz, a company spokeswoman, would not comment on the types of jobs eliminated or the location of affected workers. The reductions are being accomplished through a combination of buyouts and layoffs, Janasz said, adding that those facing involuntary separation are being given benefits including severance pay.

"General managers are now leading the business," she said of a reorganization that's part of the downsizing. "We believe that this is the right model that will be supportive in bringing new products to market faster and being more efficient in doing so."

Yep, because firing workers ALWAYS results in greater production and efficiency. So what is the real reason behind this announcement?


Growth in the market has been hurt by a series of product recalls over the years and, most recently, a federal investigation into whether implantable defibrillators have been over-prescribed. The device systems can cost up to $30,000.

Nelson said the job cuts reflected the sluggish outlook for heart rhythm devices. "This is endemic of a very slow growing - in fact declining - market," the analyst said. "Even though the signs are that things may be stabilizing a bit, they're still down."

So, it was a crackdown on unnecessary medical procedures being performed in the name of higher corporate profits. At this point, I'm pretty much beyond being surprised by this kind of stuff.