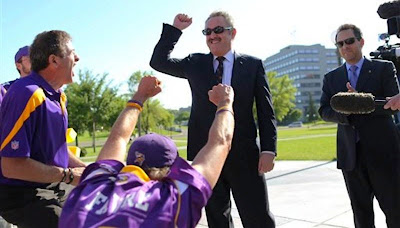 image: Morons in full tribal regalia bow down to billionaire sports chieftain who just robbed their community blind at their behest

Back on December 4th, I posted the second of the two stories about the difficulties that the Minnesota Vikings were having in lobbying extorting the Minnesota legislature in an attempt to have taxpayers subsidize the construction of a new stadium for their crappy NFL team. Back then, it looked like common sense might actually win out for once and deny the Viking's billionaire owner his new taxpayer subsidized sports palace, but alas, no such luck as reported this week by the blog Field of Schemes:


Sure enough, the Wilfs are not going to look a gift stadium in the mouth: The Minnesota Vikings owners agreed yesterday to pay an extra $50 million toward a new Minneapolis stadium, roughly splitting the difference between the $100 million hike the state house wanted and the $20 million increase the state senate approved. The revised legislation reconciling the two bills was approved in the house by a 71-60 vote at 3:30 this morning, and now heads to the senate.

From the sound of things, the Vikings have also agreed to the "blink-on" taxes on tickets, parking, and memorabilia that will go into effect if the state runs short of gambling proceeds to pay its share of the stadium; the Vikings did get back an exclusive five-year window to get an MLS team to play in the new dome, however.

So the final tally is:

The state will put in $348 million, either from electronic pulltab gambling proceeds or from stadium user fees if that's not enough.

The city of Minneapolis will put in $150 million in cash plus $189 million over 30 years for operating costs, a total that (counting the cost of borrowing the money, since the taxes to pay for it will be tied up paying off the convention center for the next few years) should come to around $375-525 million in present value.

The Vikings will put in $477 million, plus $327 million over 30 years for operating expenses. The team will get 100% revenue from NFL events, while the city and state will get money from the occasional monster truck rally.

There are a couple of lessons you could take from all this. On the one hand, it shows that when state legislators make demands, team owners who previously said "not one penny more!" can actually find quite a few pennies in order to protect a nearly billion-dollar windfall. On the other, it shows that if team owners ask for the moon and the stars, they can usually count on being bargained down by only a couple of lesser planets.

And the billionaire asshole in question couldn't be more tickled pink as the transcript from an interview with a local sports radio station posted by Deadspin:


Q: What was it like to know you'd be getting a new stadium?

"I slept well knowing that we're going to get a new home. And that the fans were so excited really made me excited to get going in building this stadium. It's great."

Q: How much of a difference do you think it made that fans made a huge push with their legislators?

"It was the key, the key, to getting this done. The passion of the fans coming out in support of this, holding their emotions after all these years, and when it really came down to crunch time, the passion of the fans carried us over the top. I can only thank, on behalf of the ownership, all of the fans out there. You guys were responsible for getting this done. … Without that passion, without that support that we've learned over the last seven years … is something that we're excited about."

That's right, Minnesota Vikings fans care more about whether millionaire and billionaire fat cats have comfy sky boxes in which to plant their ample asses and while away some leisurely autumn Sunday afternoons than they do about whether their teachers still have their jobs, or their roads are in proper repair, whether there are enough police on the street to deter crime, or any other vital public service that has been feeling the squeeze from recent budget cuts. And don't forget, this is the same city where a major highway bridge collapsed just a few years ago, killing 13 people and injuring 145. Behold the glorious deeds which occur when Idiocracy meets assholocracy.


Bonus: I never really believed that Lou Reed ever wanted to play football for the coach